At a time where there is little to be happy about, it was warming to be part of a nice ending to a story, albeit a short story at that...
Wondering what the dog was showing so much interest in last night, we investigated and found a grounded, adult Swift in our garden, barely covered in the undergrowth, with little more than a couple of fern leaves shielding it from the chilly North-Easterly winds and imminent sharp showers.
It's eyes were closed and the poor thing was shivering on and off, not looking very well at all. Giving no resistance to being picked up by a scary Human for probably the first time ever, it really didn't look like the morning would bring a cheery outcome.
We lined a shoe box with a nice thick towel and let it rest its weary little self. Just after midnight I managed to get some fluids down it and left it for the rest of the night until 0600 when I got up for work.
It was surprising to see it was still alive by then, even if not really showing any improvement. I'm no bird ringer but it weighed in at 35g which I read was ok for an adult, albeit at the lighter end of 'ok', but that was reassuring. Some more fluids before work and left alone in the quiet again.
Early afternoon and I got a call from our Son who had heard some flapping from inside the box, so I called it lunch break time and nipped home to see what was going on. Its eyes were now half open, it had pooped in the box and was now more aware of its surroundings, looking around a little. More fluids in and it was definitely on the up now, looking around more and more and moving around. I had it in my hands again and could actually feel some warmth now - excitement level rising! We where now by the back door for a bit while its eyes adjusted to the bright sunshine. As we walked into the garden it was fixated on looking up at the sky now, where other Swifts were whizzing around and calling each other. It's as if the sound of the others calling up there had perked it up and gave it a boost, it really was. A little longer in the hand to adjust its eyes and get its bearings and we went for the launch...SUCCESS! Up, up and away it flew. Circling and gaining height above our heads, we even saw it attempt to feed before it slowly drifted away at height, out of view.

Quite how it ended up grounded, I'm not sure. Flew into something? An exhausted recent traveler? I'll never know but what an absolute privilege to see such a majestic creature up close and impossible not to form a bond in the circumstances. A real feel good moment after being almost certain of its impending demise. Godspeed Swifty!

(I must thank Mark and Graeme for their sound advice!) 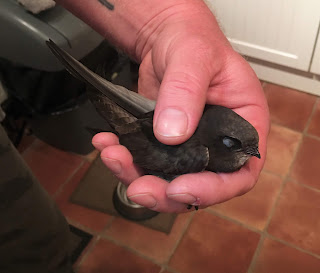 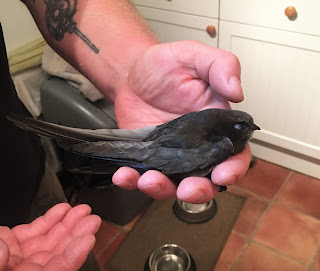 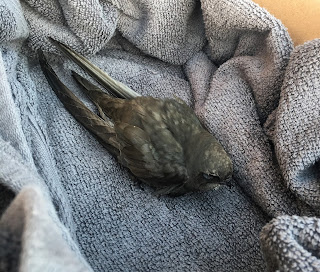