Great day on the patch today

Have to laugh really...

In my past few trips to Staines moor, my local patch (and I always said I wouldn't "do" a patch but I've been blindsided and am now fully into the moor!)  I've had very little to show for my hours of meandering around in the cold.
Time was at a premium today and I had only a few hrs to spare but, it only takes seconds to see a decent bird so, with that in mind I headed straight for the moor.

Parked up on Hithermoor Rd and spotted the usual couple of Collared Doves before taking the path adjacent to King George VI reservoir, towards Stanwell and Staines moors. The usual flock of House Sparrows were absent today and just the single Goldcrest was busy zipping around the branches picking off insects, it was looking quiet.

Through the gate to Stanwell moor but it had nothing to offer, other than the thick mud under foot! Just as I was about to step off the boardwalk onto Staines moor, I heard the squealing of a Water Rail from the reeds to my right, and it was close! It was deep in the undergrwoth but after moving into a better position I got broken views of it picking its way through the undergrowth.
I couldn't give you the precise history on Water Rails at Staines moor but I can tell you that it's the first I've seen or heard there. Funny thing is I swore blind that I heard one calling in the distance, at the same location a couple weeks back but heard no more and let it go - guess I did hear it afterall!

A good start, I was already happy with that after so many blank visit previously, so when I walked on a little further and saw 2 pristine looking Stonechats (m+f) perched on the bullrushes, it felt like my lucky day. Before I could get my camera to grab a shot I heard what I thought was the call of a Water Pipit to my right! I scanned the opposite bank, et voilà! There it was, really going to town on the greenery, pulling and tearing it to pieces as it made its way along the bank, quite funny to watch actually - reminded me of when puppies destroy their toys!
This time I managed a few shots, although nothing that'll win any NatGeo awards. 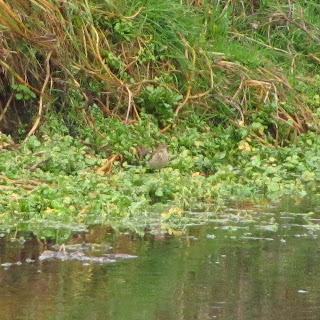 It even flew to the fence for a better view. Sadly, that doesn't make my point-n-shoot any better of a camera: 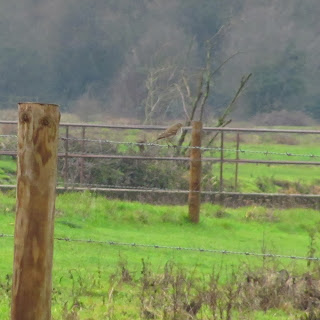 The Stonechats had since moved on but crossing over the first bridge disturbed the Grey Wagtail I often see (presuming it's the same individual?) and some dog walkers in the distance had flushed a Little Egret, which flew by quite close after eventually settling down again: 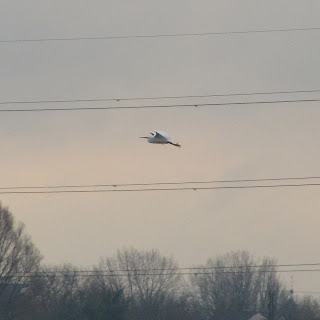 A single Jay was being rather vocal and 5 Meadow Pipits were doing the rounds, half a dozen Green Woodpeckers were also busy rummaging on the deck. The Fieldfares are still in very good numbers on the moor, with c100 present today. They were quite unsettled today, more so than usual and seemed to move along the M25 onto Stanwell moor and back again. Last time I pulled out a single Redwing amongst the flock but I didn't have to time to check for any more today. 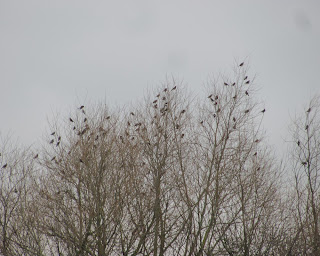 I gave the Iris channels a good going over, they usually hold a Common Snipe or two and local Staines moor birder Lee Dingain (Whose blog can be found HERE) had a great find in the shape of a Jack Snipe last week, so I was a little hopeful for that too but actually saw neither.

Not bird related I know, but I noticed this dug into the bank, is it a home for something??.. 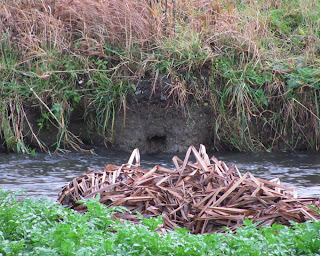 Time to make a move and a single Song Thrush made itself known as I walked along the boardwalk back onto Stanwell moor. It was again quiet and I was probably concentrating more on not landed on my ar$e through the mud than anything else...UNTIL I stopped at the paddock gate by the barbed wire, to clean the 10kg of mud from my wellies.
With boots feeling lighter I scanned the reeds - something I always do in hope of a Bittern, a bird I've never seen there before but feel that there should be one in there somewhere!
As I lifted my bins I saw a bird take flight from a fence post and watched it fly away, curving over the reeds, low into the trees behind - a Merlin! A bloody MERLIN!
It was definitely an adult male, the bluey - gun 'metally' grey was very obvious.

A little pic to explain further: 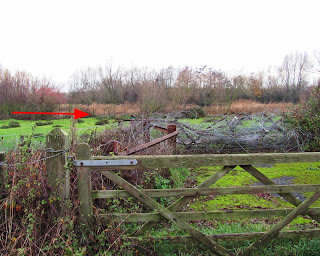 Not only is this a great spot for myself but a nice record for 'the moors', as a female Merlin was first spotted some weeks back on the causeway of Staines Reservoir by dedicated res watcher Dominic Pia (@ReservoirDom on Twitter). Not long after that, a Merlin was accidently trapped ON Stanwell moor as part of some seperate research and again, reported as a female.

I'm certainly no professional and am more than happy to be informed/corrected, but my question is:


The reason I ask is to maybe find out if the bird I saw is that of a Juvenile which has matured? Or even better, just simply a male to pair with the female which has also been in the area this winter?

What an enjoyable 3-4hrs I had today, on MY PATCH!