Back on the patch.

It's been a shamefully long time since I've been to the patch, Staines Moor, for those who don't know. In fact, the 18th June was my last visit and according to my notes, it was one of many mediocre trips to the moor, with 2 Jays being the highlight of the 3hr traipse that day.
There are a few reasons for my long period of patch neglect; We both do shift work and so it's not always physically possible, but if I'm brutally honest, the moor had been rather hard going for some time and most often with no reward at all. The area has suffered, and is suffering a lot from irresponsible dog walkers, dirt bikers, even parachuting children being sent up in the winds, over the breeding birds, while adults anchor them from the deck.

I will continue to bird the moor and it will stay as my patch, like a relationship, through thick and thin. HOWEVER, in my opinion Staines Moor SSSI is destined for a sad and disappointing end unless it can be saved from the uninterested arm of the local coucil and placed in the hands of an independant trust/body, such as Natural England or even one of the Wildlife trusts. I hope I'm wrong.

As for today, I was very hesitant and actually going to give it a miss but needed the fresh air if nothing else. The walk through Stanwell moor was very quiet apart from a couple of Chiffchaffs which were still singing away. A glimpse of a Common Buzzard low over the paddock was a nice suprise as these are normally soaring at nosebleed heights over the moor. Two seperate Cetti's Warblers were heard from each end of Stanwell moor, with at least one more along the path from Hithermoor rd. I was loosely hoping for a stray Pied Flycatcher (a bird which is long overdue on the moor!) around the boardwalk area but obviously, no joy.
I would've traded my KitKat and spare camera batteries to have had a parang for that walk! The boardwalk is barely half a plank wide for most of it, with Himalayan Balsam doing what it does best - taking over everything!

First to greet me as I stepped onto the moor were the usual Linnets, Goldfinches and Meadow Pipits, with the odd Crow and Magpie scooting around the bushes. Near the northern bridge I saw one of my favourite sights; the neon blue flash of a Kingfisher whizzing down stream. It perched up in the open to give me a nice view through the bins.

(Forgive the photos, all were taken at top zoom from quite a distance for my little point-n-shoot.)

Crossing the bridge and heading into the NW corner, a group of 20(minimum) Swallows appeared from nowhere and were feeding together, taking in turns to rest for a short time in the tops of the trees. A Kestrel was having trouble finding a quiet corner to have a break from all the mobbing. If it took to the skies, the Swallows were all over it. If it laid low, the Magpies were straight on its case!

The Buzzard that I had a brief look at through Stanwell Moor, showed itself in the NW corner, again very low, skimming the tops of the brambles and very vocal the whole time. A further wander around the area was fruitless until I crossed back over the bridge and headed back.
Now high overhead I could hear the Buzzard calling again, although now there were FOUR Common Buzzards, soaring as two seperate pairs and eventually drifting NW, but not before the Kestrel I saw earlier reappeared, hovering over the centre of the moor accompanied by TWO more! Adding to the already busy skies, a Hobby showed up and at a reasonable altitude where I could observe it picking off and eating Dragonflies, on the wing - fantastic to watch!

I was so busy looking up that I didn't realise the bird posing on a post, on the opposite side of the Colne - a Wheatear.

Only a couple of posts further along, was a smart looking Whinchat. These are probably two of the species you would be most likely to bump into during migration times, but always a lovely sight.

Already chuffed with my mornings outing, I was then to be spoilt rotten by the Moors' standards. About 20ft further along from the Wheatear and Whinchat, a patch first for me was perched on the barbwire: a Spotted Flycatcher! I had just long enough look to grab a few snaps before it took off and flew into the tallest tree, over in the NW corner.


Lots of inverts still around, Dragonflies and Demoiselles in good numbers. Red Admiral, Comma, lots of Speckled Wood and Small Heath butterflies about too.

With the exception of a few idiots over there this morning, this was by far, one of the more enjoyable days I've had on the patch for a long time!

Lastly...a singing Robin with a tick on its face. Just, because: 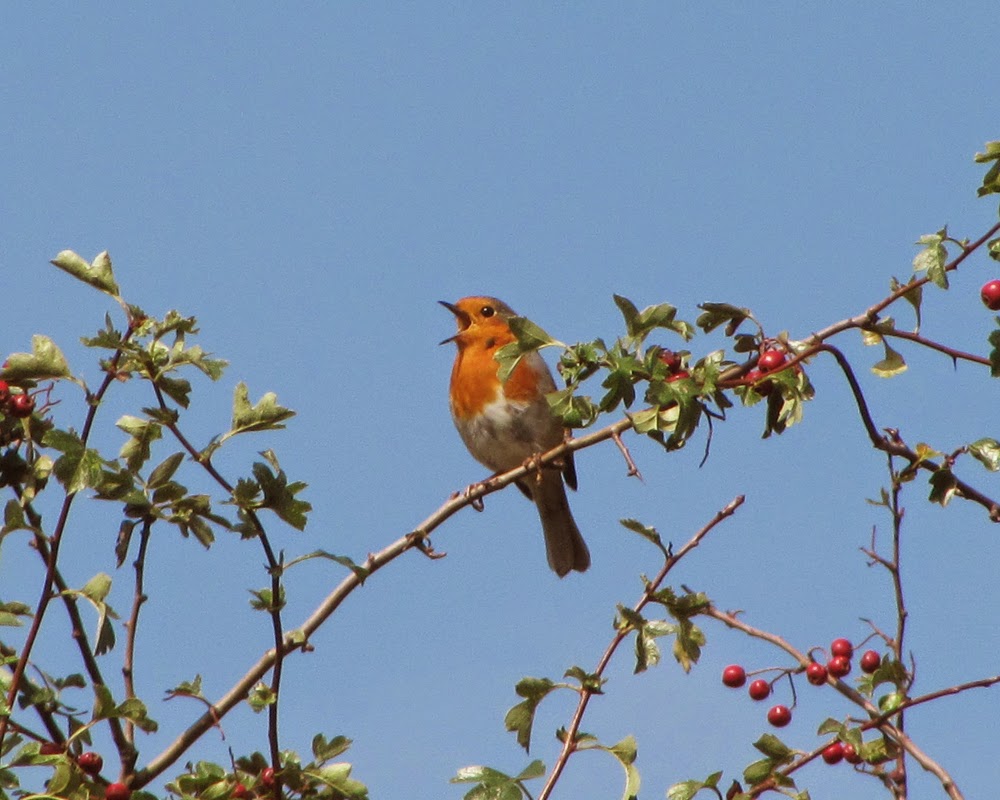