Don't panic! This has nothing to do with crying babies, screaming wives or any humans at all actually. Apart from me.

I've always been tempted to rear caterpillars, don't know why exactly? Why do we want to watch wildlife at all? A question I'm sure many of you may have pondered before now. I know I have.
For me it's a continuing appreciation of the living world around us, as well as an obsessive part of me that will not be tamed!
I have to know what I've seen, what I'm looking at, what it feeds on, what it's doing. I 'need' to know about it's life cycle and that's where the curiosity of rearing sneaks in. The sheer wonder of metamorphosis goes without saying. In addition to that, for me, it's about the knowing again - I wonder what that larva will be?

Today has been a very rewarding day for me, I really feel like a kid buzzing on Christmas eve. No it's not Christmas eve and no, I've not won the lottery nor have I helped a Granny cross the road. I have successfully reared a Hoverfly from larva to adult and with the help of Archie (who has been heavily involved, as you can imagine), we removed the lid and watched it fly off.
Big deal will be the response for most, but today I've been able to successfully ID and label a larva, pupa and of course the adult of something I had no clue as to what it was. For someone like me who's obsessed to wanting to know what everything is - THAT is why I'm buzzing!

This Hoverfly is one side of the coin though, as within the space of a few days, the 2 Hoverflies we've been rearing have had two VERY different outcomes:


Firstly, the not-so-happy ending (for the Hoverfly, anyway):

Found in the undergrowth of my Parents' garden in late February and seemed perfectly 'normal'. 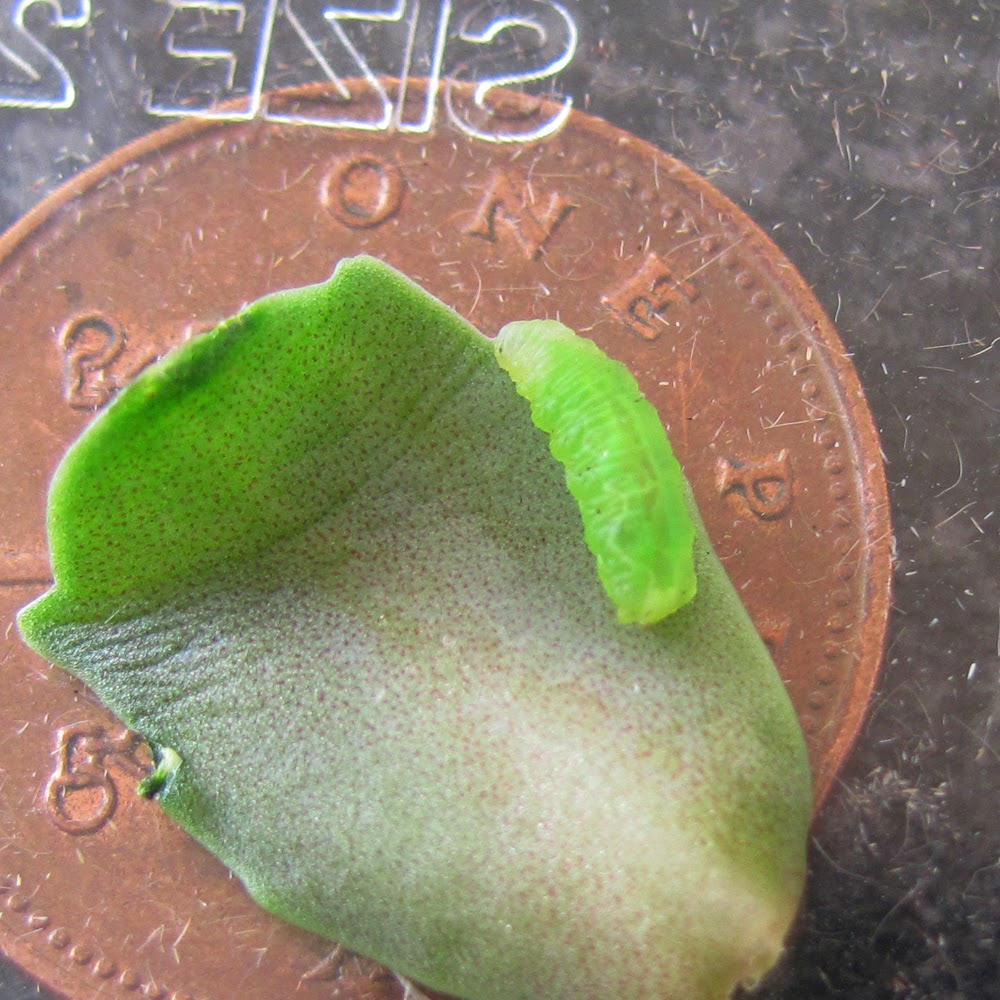 It was already quite chunky and not overly interested in the aphids we found for it to feed on, however any doubts were left behind as it pupated within a week of moving to the safety of a clean pot.

I must take a moment actually, to give big thanks to Dan Lombard (@ViperaDan) for his help with larval ID. This particular Hoverfly being a Melanostoma species of some sort.

The pupal stage went fine, with it darkening from the bright green, to a light, then darker brown. I was photographing at different stages to catalogue an album of life cycle stages, when on closer inspection I noticed small hole in one end of the hard case.
Under the microscope, the tiny hole looks a lot more sinister: 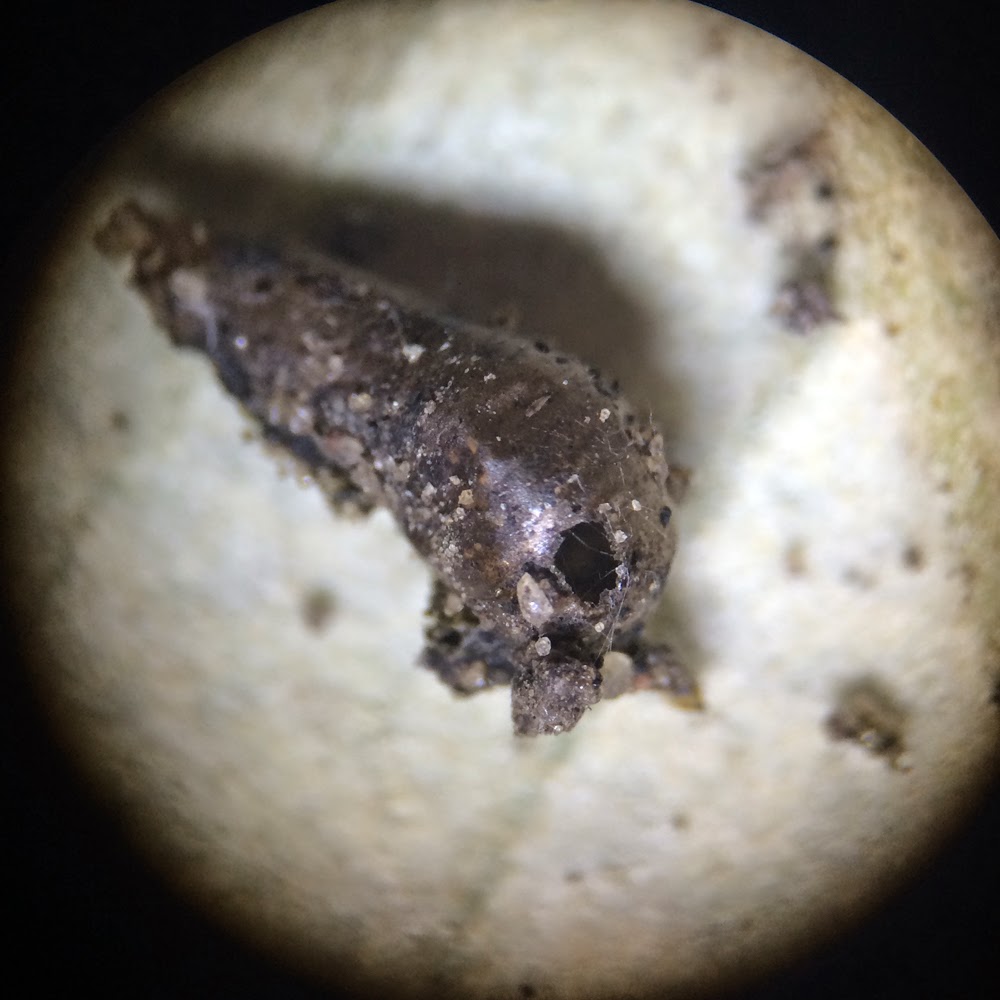 No adult to be seen and the hole's to neat and small for that anyway. What the hell?!
Purely by chance, a few grains of dry dirt moving in the pot, caught my eye. I had a gentle dig around with a toothpick and found what I believe to be the culprit: 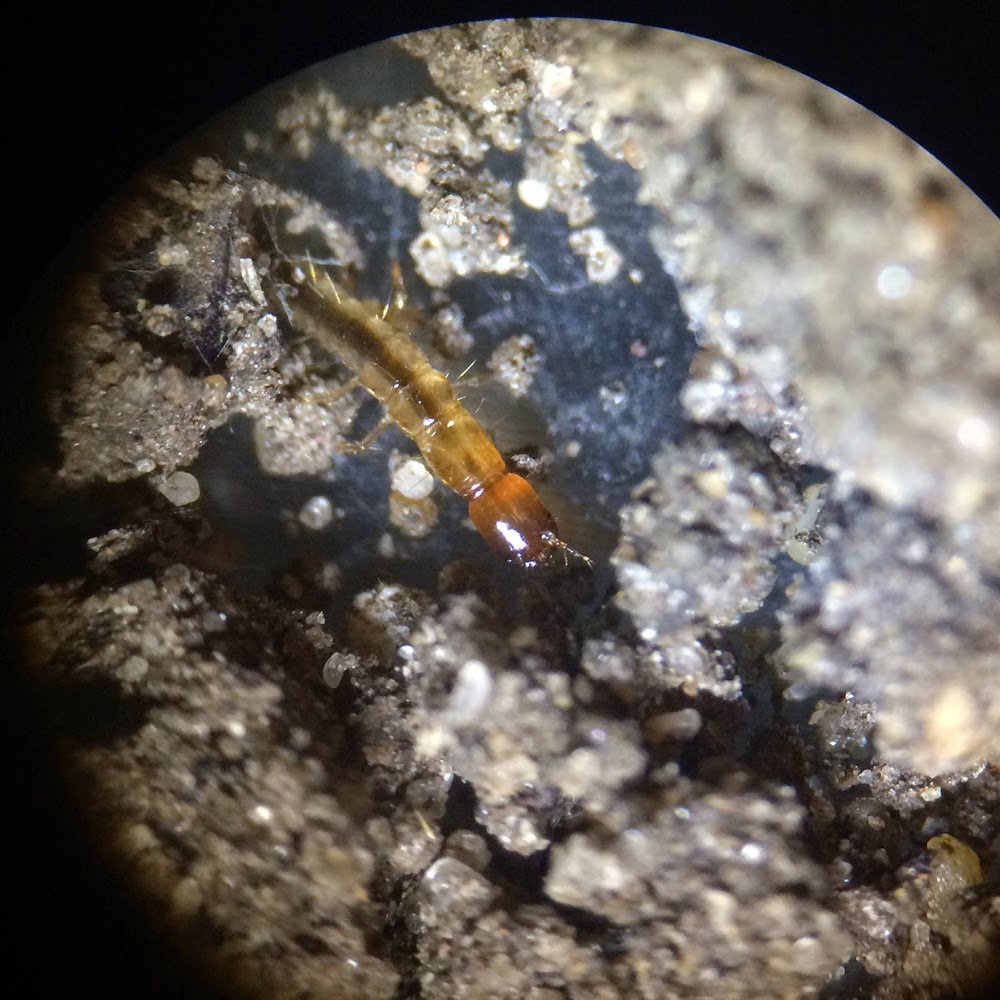 From one unidentified larva to another! After a lot of research, I'm leaning towards this being one of the Staphylinidae - a Rove Beetle.

The other possibility is it being one of the many Carabidae - a Ground Beetle.

Either way, all fingers are pointing towards it as the reason why the Hovefly is no more. A couple of theories;
1) it had always been in the dirt but too small to be seen, chewed into the pupa and polished it off as a huge meal which led to its growth.
2) some of the Staphylinidae are known to be parasites of small larvae, could've been in there the whole time?

Yes, I wanted to rear this new larva, despite initially only commiting to Lepidoptera (and the odd Hoverfly!), but there's the obsessive bit again. This one however, would be a LOT of work - the larvae feed on other small invertebrates, such as Springtails, small fly larvae etc. Finding aphids in February for a Hoverfly larva was challenging enough so this was a no-no!
With that in mind, I released the entire contents of the pot back onto the same patch of soil, in which they were first found.


Now, the happy ending one:

Found in the first week of March, hanging on to the inside of a swingchair cover. This one was also not interested in the aphids we'd expertly hunted, nor did it move too much. Again, after about a week, it started to pupate - relief! 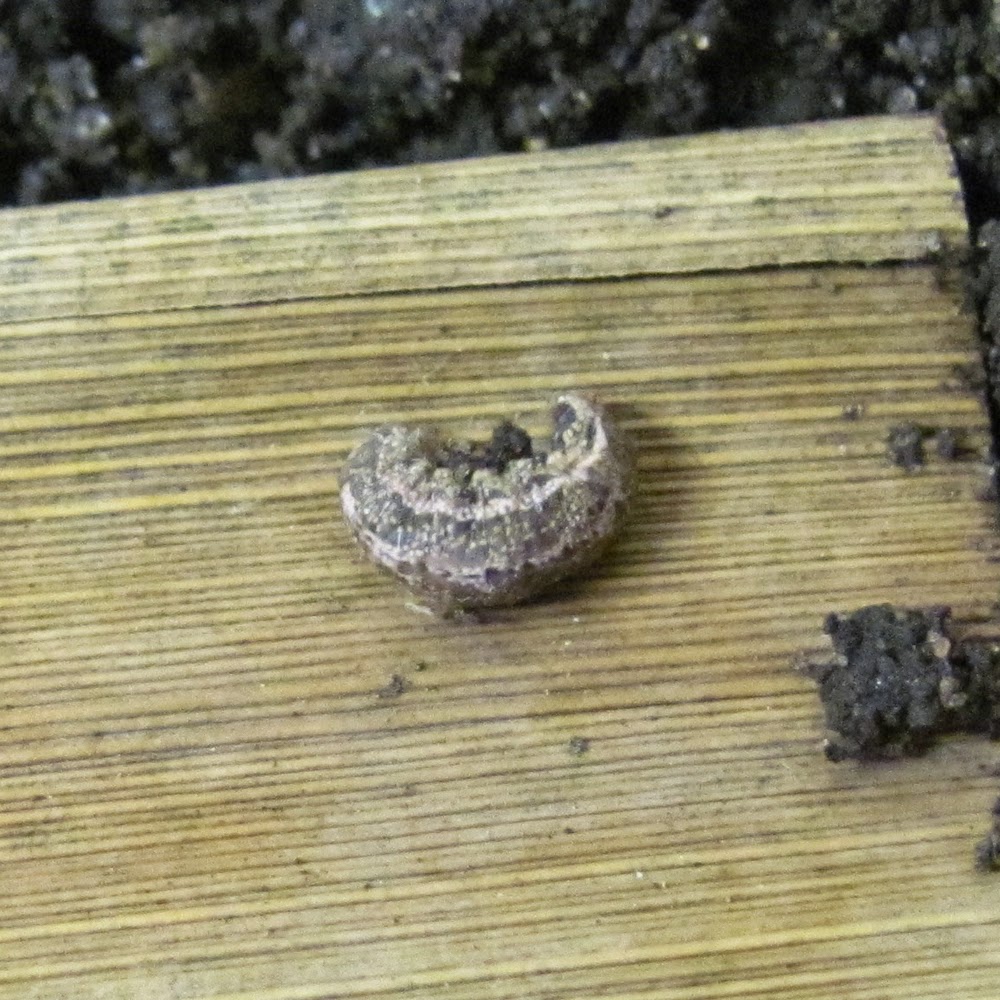 Towards the end of March, the pupa had started becoming clearer and details could be seen through the case:


Which brings us to today. There're a few pots in a cool, hallway cupboard now, so every few days we check, clean out the frass and generally have a look. Today, this pot greeted us with a fresh adult Hoverfly walking around the dirt - chuffed to bits!


Now having a pristine adult specimen in my nursery care possession It didn't take long to narrow it down the genus: Platycheirus, a tricky group and not easy to pinpoint to species. Armed with Britain's Hoverflies (by Ball & Morris), my Dad, a truly superb Flickr album by Steven Falk and a microscope, I can confirm that what we'd reared is Platycheirus scutatus.
Here're the main diagnostic features. Apologies for pics, until I get a camera adapter, it's an iPhone to the eye piece job! 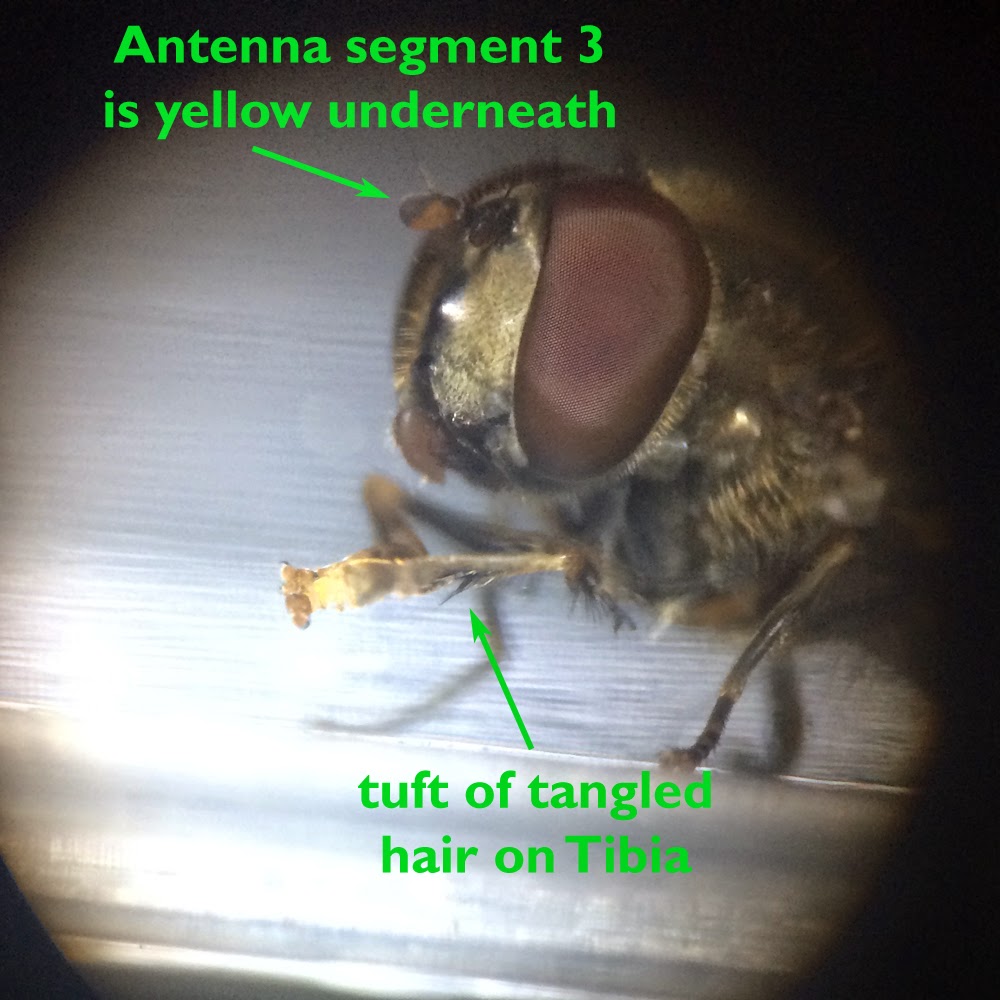 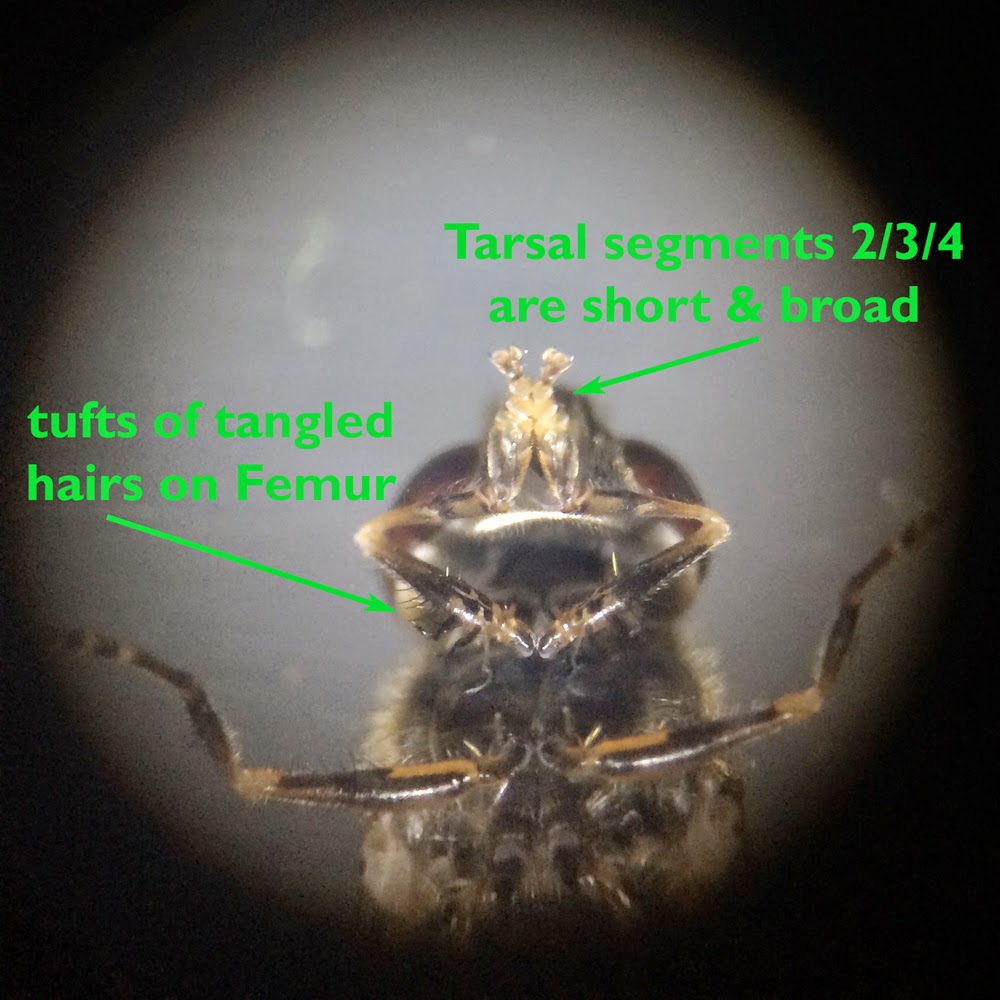 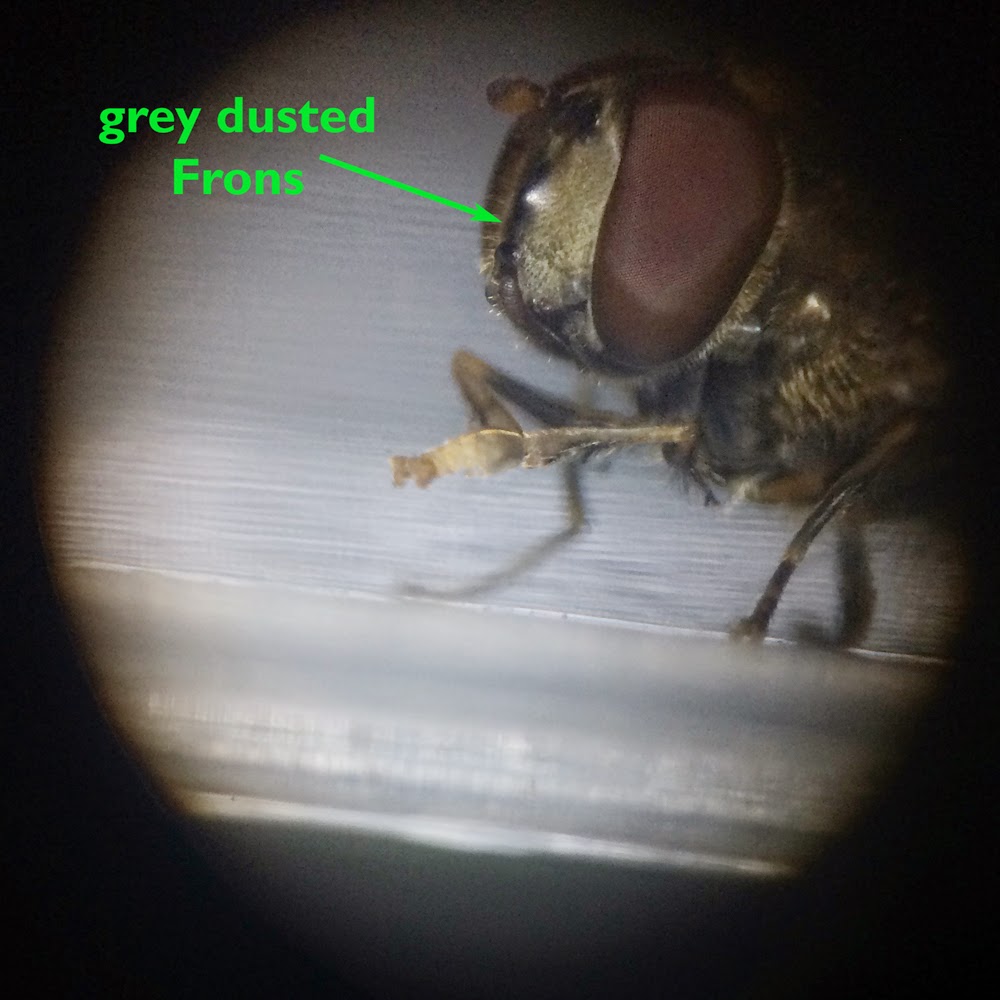 So, THAT is what's my day rather rewarding, I have learnt a LOT!

Also in Hotel Kerr at the moment is;
- an over-wintering Large White Butterfly chrysalis,
- TWO Lesser-yellow Underwing moth caterpillars,
- a probably Square-spot Rustic caterpillar which has now dug deep into the compost,
- an unknown pupa attached to a Teasel seed head
and a micro moth larva (ID tbc) inside another Teasel head.