...and I mean that literally but will explain later.

So. First blog, first post and as I've been doing more mothing than birding lately, you can guess where this is going.

For those who don't know, I live 5 floors up in a flat, which is great for a bit sky-watching and picking out birds of prey (of which I've seen Buzzard, Peregrine, Kestrel and Sparrowhawk from my living room window this year) however, no garden = no moth light. So, whenever I want to run the ol' mercury vapour light, I have to hijack my parents' garden in Isleworth. It means getting in the car for 20mins instead of just walking out of a back door but until we get that little cottage in the country, that's how it is.

2013 is the first year I've really made a go of the moths (and Butterflies) and have started a garden list which already I can't wait to compare with next year. That list so far, stands at 128 species of moth which I know isn't half as much as most people doing the same but, on running the light on average of about once a fortnight throughout year, I didn't think that was too bad of a number for first attempt. Not to mention the ones in the earlier days that I quite simply didn't have the balls to attempt to ID!

On to last night, I sat around the MV light from 2000hrs-midnight and had a nice variety considering the, at times, strong breeze. 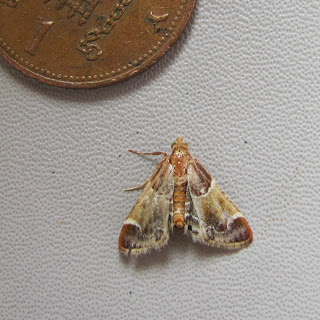 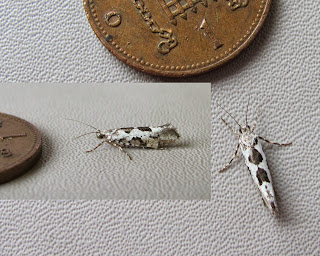 ...as was this little cracker, a Beautiful Plume Amblyptilia acanthadactyla: 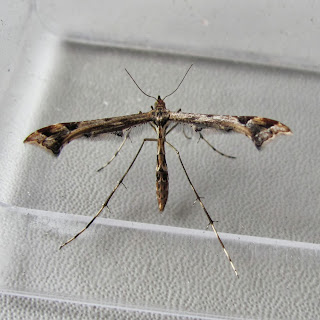 All year, I've been willing ANY species of the Thorn moths to the light. I'm not fussy which one, they're just a type of moth that I've always wanted to see but to this day I've not had a so much as a sniff at one. Not a sausage...until quite possibly last night! I was just starting to pack up for the night when a good size moth, of an obvious pale/canary yellow hue flew straight into my chest and under my arm. I span around quicker than John Travolta on the dancefloor, to see the big yellow blur whizz off over the 7ft hedge. Never to be seen again..