More of birdy post than a mothy one this time and on arguably one of the best birding coasts the UK has to offer: Norfolk. More specifically, Titchwell RSPB.

This weekend was that of the anniversary of my mother in law, a great woman and dearly missed. For Sunday, a trip to the small village of Coton, just outside Cambridge was the order of the day, to pay our respects and visit other relatives at the same time.

Coton is as good as half way between our flat in London and the Norfolk coast - cue the spontaneous idea from my good wife: "why don't we do the grave in Coton, then drop you off at Titchwell, while me and Archie (our son) go to Hunstanton and pick you up about 6pm?"

Good deeds done, we pulled into Titchwell car park at around 1130hrs and I was out of the car like 007 before Mrs K had even finished parking - well, it looked like 007 to me anyway!

I've wanted to see one of these Yellow-browed warblers since the influx a few weeks ago and knowing that Titchwell has had steady reports of one that very morning, I knew I was giving myself the best chance to catch up with one.
The latest sighting was along the Meadow trail, however, very elusive. Not deterred, I headed straight down the trail, ears and eyes open but no luck and no sightings since the initial one made by warden Paul Eele (@paulEele on twitter), who I'd also like to thank for his help.

With so much to see on the marshes and a number of Cetti's warblers belting out their call along the path, I walked on through the trail and up the west bank path. The sun was blazing and every step was disturbing all sorts of dragonflies, mainly Common Darters and even still a few Ruddy Darters. I wasn't closely studying all of them but zipping over the reeds were also Migrant, Common and I think; Southern Hawkers. A lot of them mating and crashing into reeds whilst coupled together. Commas and Red Admirals were out on the wing, it was easy to mistake the date for the 6th of August and not October. Unbelievable!

Yellow-browed aside, I was hoping to see the Curlew Sandpipers too and within a few minutes of looking out over the freshwater marsh, there they were!
(Now I'm not ashamed to admit that of all the bird types, Waders, closely followed by sea birds, are what I struggle with a bit. OK with the more obvious ones but not so much the nitty-gritty waders that look very alike).
With that in mind it was great that literally side by side, all in one view, were a Curlew Sandpiper, Little Stint and Dunlin for comparison. Apologies, but no photos of these, just too far for the ol' point-n-shoot I'm afraid..

I made myself comfortable in the south hide and picked out:
A lot of them were in eclipse plumage, just to challenge my ID skills further then in true falcon fashion, we saw the entire marsh take to the skies before moments later a Peregrine swooped and darted into the flock, only to emerge with empty talons and bolt off out towards the beach. An hour or so later, what I presume would be the same Peregrine tried again but this time, coming in low over the water at speed and flying off with an unlucky Dunlin. A fantastic sight to see these birds of prey doing what they do, gotta love Peregrines!

A look over the volunteer marsh from the North Hide, provided more Bar and Black-tailed Godwits, Ringed Plovers, Little Egret, a couple of Spotted Redshank and a few Grey Plovers. This one still holding on to the summer look: 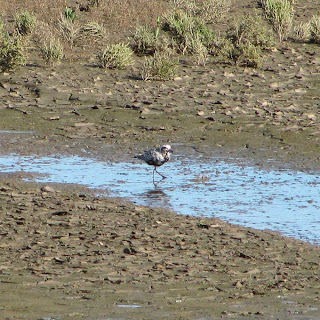 Another awe-inspiring wildlife sight has got to be Pink Footed geese flying in formation. In the time I was there, I noted 4 formations heading East high over, each were on average, 80-100 strong. Beautiful to watch: 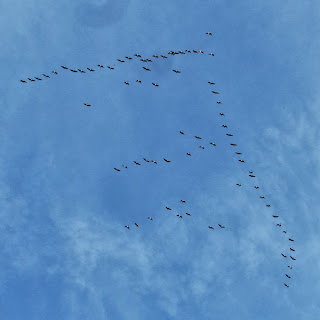 After a succesful few hrs watching the marshes I decided to head back for another stab at the Yellow-browed. Again, my efforts were fruitless however I saw a Mammal first for me in the form of a Chinese Water Deer! History has it that they escaped from Whipsnade Zoo in the early 20th century and became established in the wetlands of Norfolk/Cambs. I believe they were also kept on estates, like the Mandarin ducks for example, as 'ornaments'. What amazed me though was how easy it was to lose in the grass once its head was down, this one passed the camouflage test with an A+ 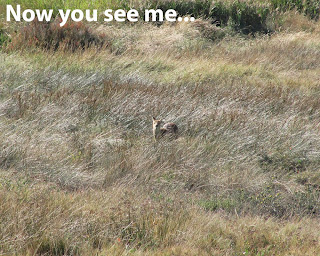 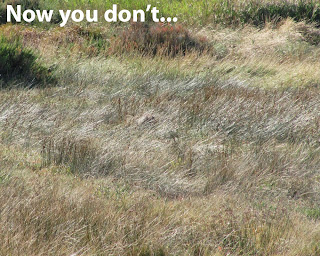 The day couldn't have been any better but I wanted to top it off with a Jack Snipe shaped cherry on top, so off to Patsy's Reedbed I wandered. Again, my luck was in as within minutes the call of "JACK-JACK-JACK" came from behind the hide.
Not only did it show well but it 'bobbed' away directly behind a Common Snipe for another comparison! Apologies for pic but to give the idea: 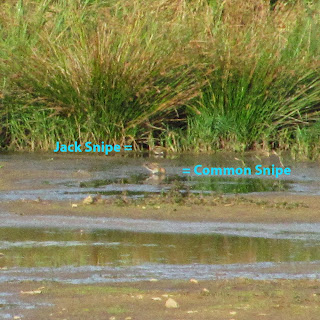 The field behind had a few Red-legged Partridge feeding and that was the end of my birding day, a few new ones for me and a great day had. Got picked up around 1730hrs, back to Hunstanton before driving home for fish and chips whilst watching this: 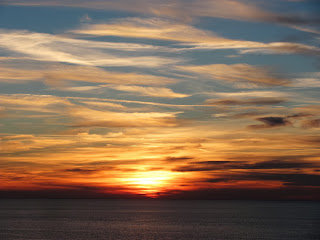 If you've read this far - Thank you! I know it was a long one, sorry!