Despite the relentless Atlantic weather systems that continued to hammer us during February with storm after storm, I actually got some quality time in on my patch - Staines Moor, or; #themoor.
I managed 5 visits this month, only 1 more than in January but spent almost double the amount of time there - 16hrs this month compared with only 8hrs 15mins in January.

It's hard to compare each month thoroughly as I visit at different times of the day and spend varying amounts of time there each month, but during Feb I saw: 1,952 birds (738 in Jan) of which there were 45 different species - 7 more than Januarys' 38.

The new 'faces' seen this month were Canada Geese, not often seen on the moor but seemed to be enjoying the floods. Cetti's Warbler, Long-tailed Tits, Pheasant and a Moorhen also new to my records this year, all being absent from my outings in January. Singing Chiffchaffs were a welcome addition too, most definitely 2 individuals noted on the 26th with a third on Stanwell moor that same day.
At first light, my favourite time of day, on the 25th, the early start was already worth it as I stepped off the boardwalk to find a m+f Goosander on the Colne. A bird I know frequents the moor but one I've not had the pleasure of observing there myself. These notoriously shy birds didn't have to look at me for too long before deciding to take flight, heading off NE. A few steps further on and I noticed a THIRD Goosander, a lone male still feeding by the concrete bridge. This bird was a little bolder and opted to swim up stream for a bit before also taking flight to the NE.

You'll have to take my word for it, when I tell you that this blurry blob in the dawn light is that very male Goosander: 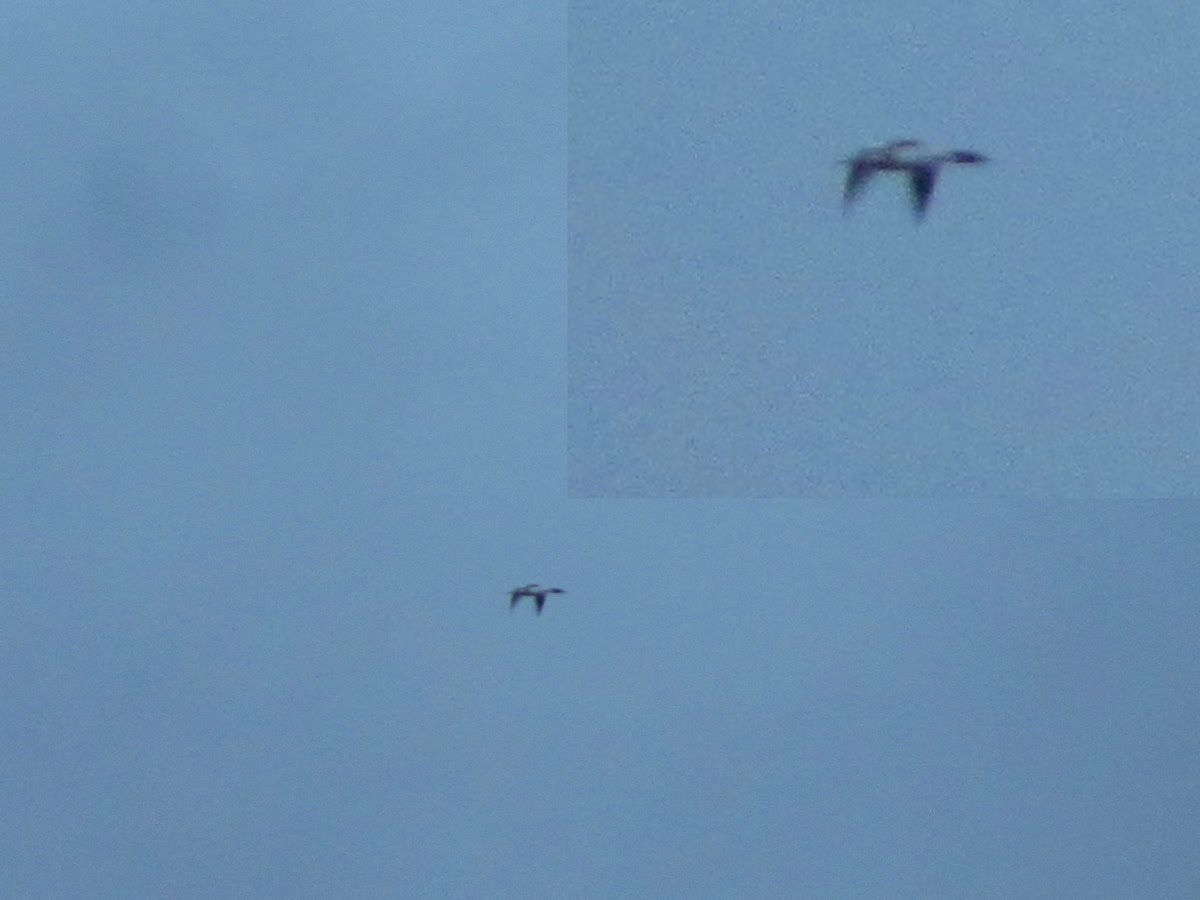 Not something that will set pagers off across the country I know, but Mallards were also new to the year for me on the patch, as was a single Herring Gull that stopped by the floods briefly to give the Black-headed Gulls some grief, before swiftly heading off W.
A Red Kite is not an uncommon sight drifting over the moor but I had to wait until the 26th Feb to see one this year. It gave quite a show and even landed for a while, local moor birder @steviem69 managed to grab this shot through his scope: 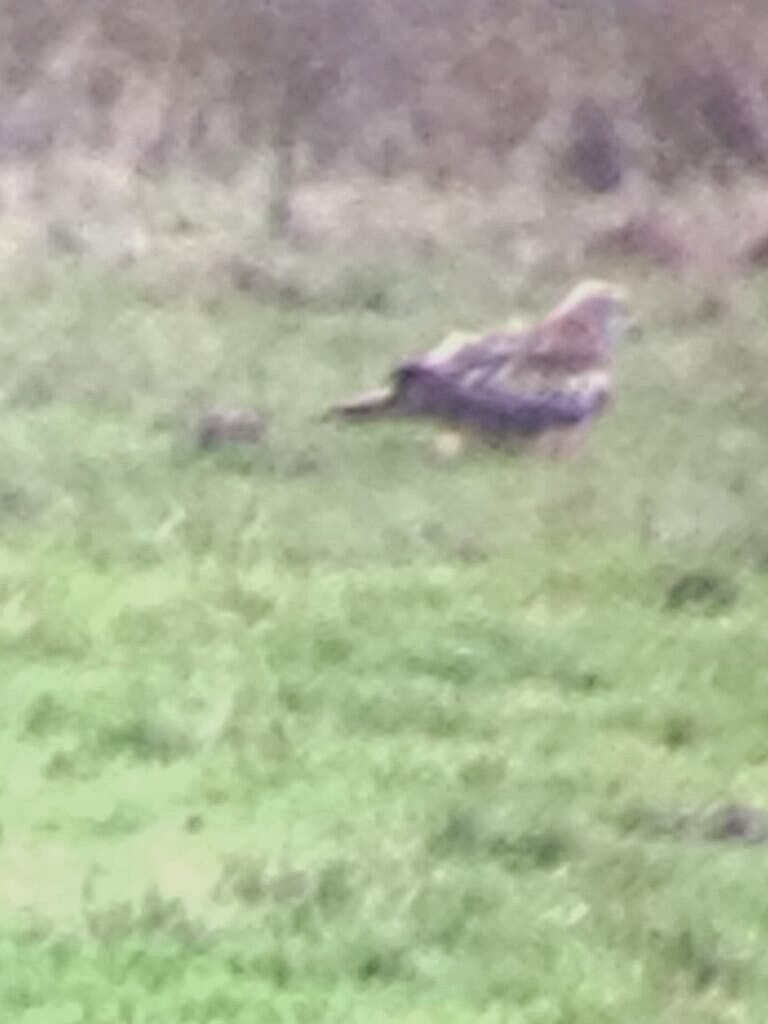 I was desperate to catch up with the Short-eared Owl and was lucky enough to enjoy great views at dusk, of it hunting along the Eastern side, on the 19th.
Lapwings have also graced the moor with their presence again, almost being full time residents in the past, they are now very much a welcome sight! The biggest change I've noticed, are the numbers of Reed Buntings now darting around between grasses, on mainly the Southern half of the moor. They seem such delicate birds and I never tire of hearing their soft 'peeping'  type call as I wander around the moor - I quite often sit myself down amongst them and just watch them going about their business: 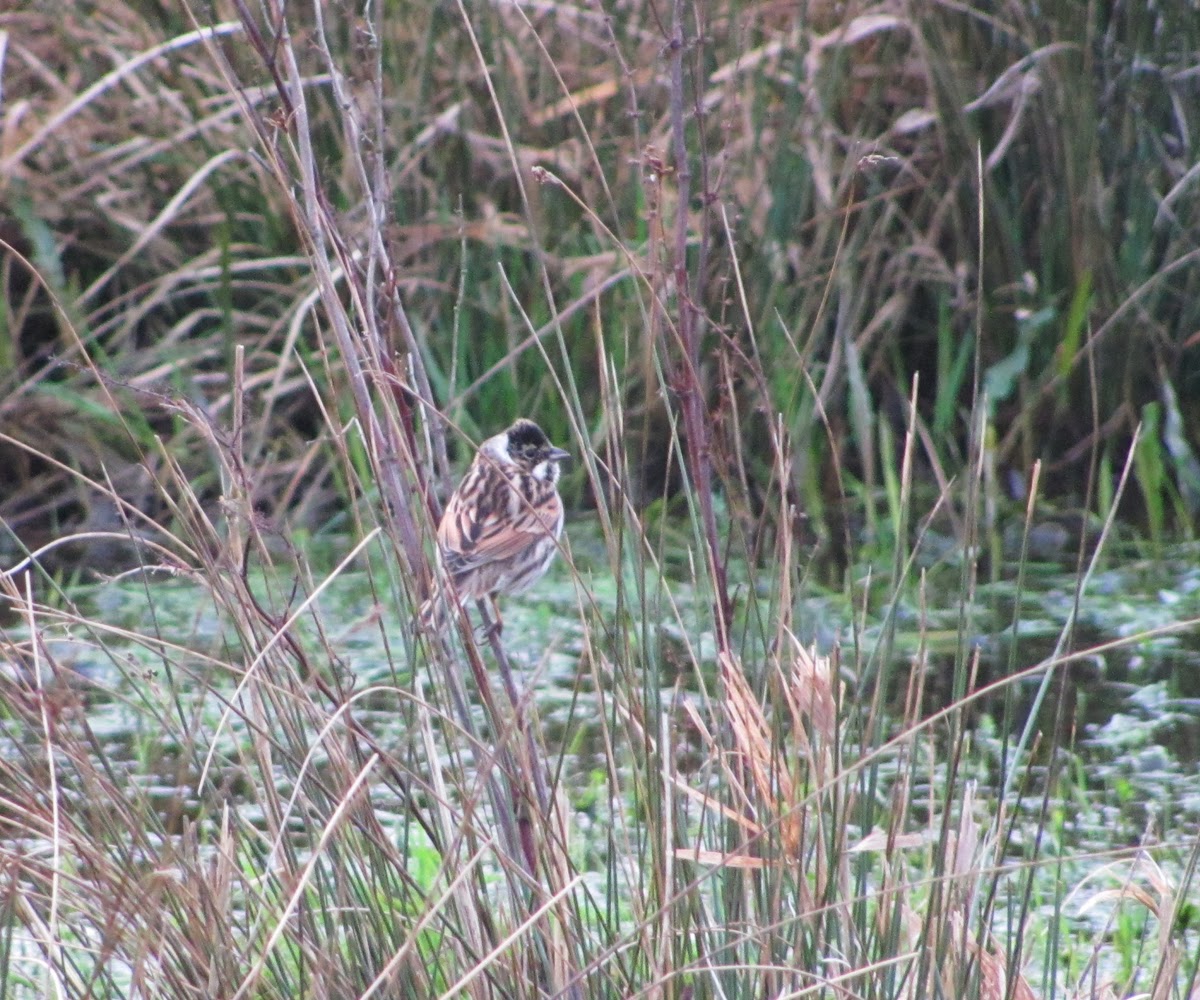 Absent from my February sightings though, which I saw in January were: Water Pipits (no doubt there were/are still some about, but they eluded me when I was looking), a lone Mistle Thrush on 27th Jan was the last I've seen of those, no Grey Wagtails for me in Feb either, nor did I see another Chaffinch or Sparrowhawk this month. The last bird missing from my Feb records was the female Bullfinch, which seems to prefere the denser line of trees and bushes along the railway line - 27th Jan was my one and only sighting of this bird, moor regular @LeeDingain also spotted what is presumably the same female earlier this year.

The Little Egrets are pretty reliable residents to the moor, only on one occasion have I not seen any at all, and twice now I've counted 7 individuals at any one time.
This one taking a break from fishing and loose dogs: 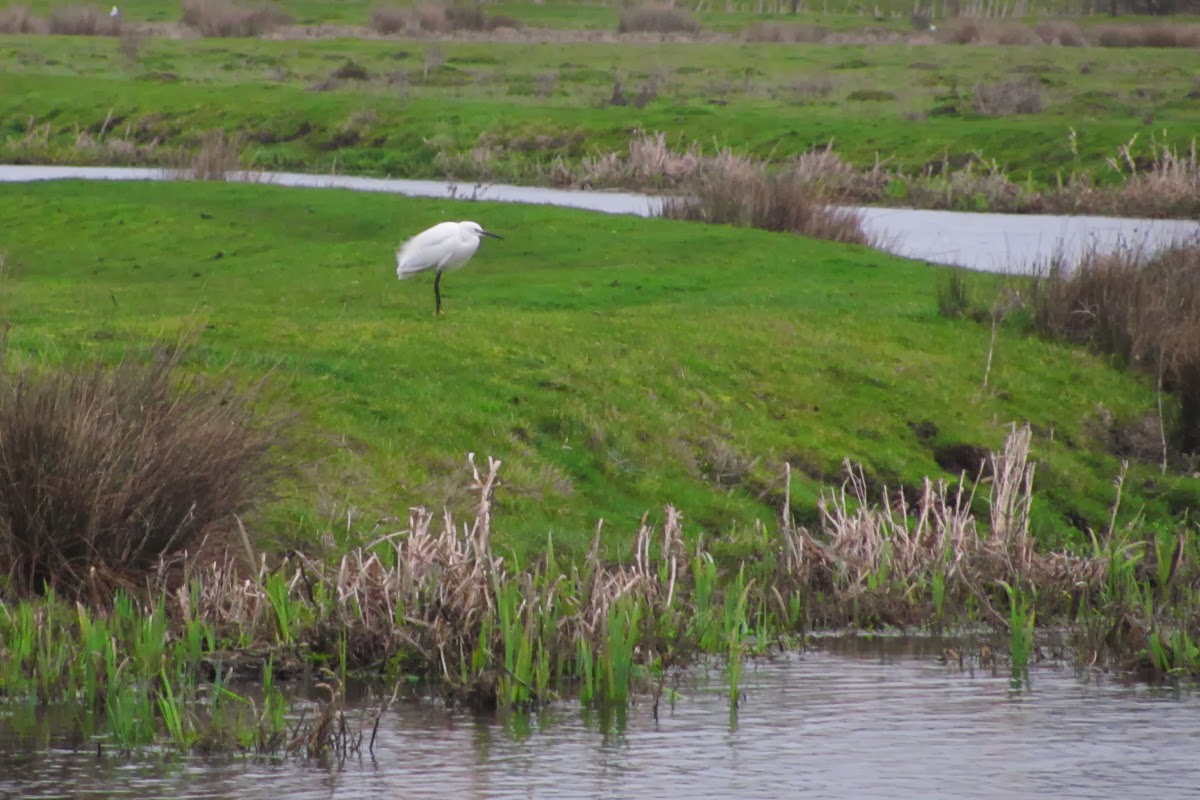 One record that stood out for me was with the Magpies, on the 25th I counted 15 which is quite a decent number in comparison to past visits. This was trumped on the 26th by a count of 19, of which 15 were together in the NW corner. This would certainly be a minimum count but one that stood out and one that, had I not been making these records, would've passsed me by without realising. 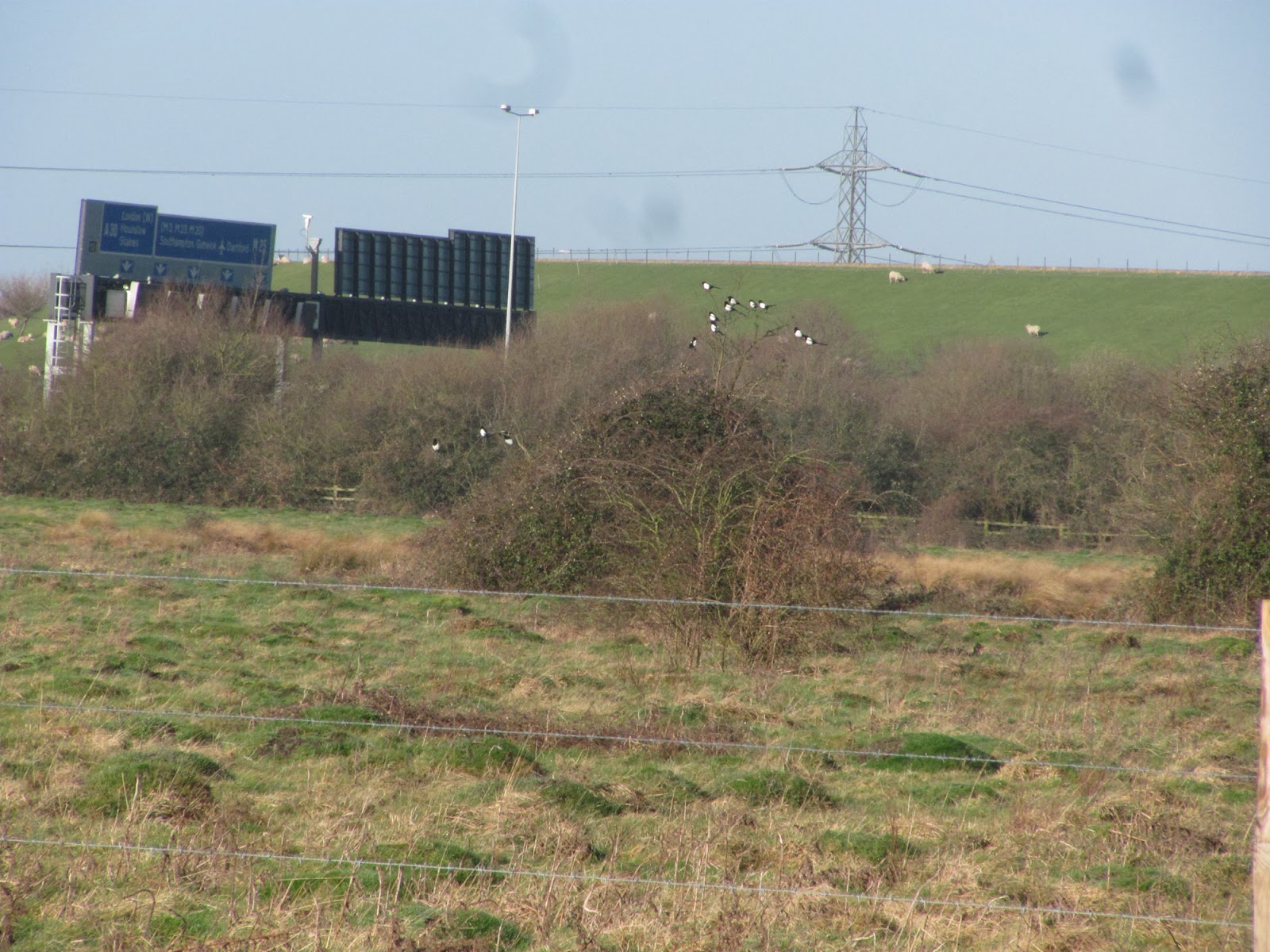 Thought I'd share these next two photos too, if you have yet to visit the moor, one thing that can be underestimated is the weather and how exposed you can end up finding yourself! Believe it or not - these were taken on the same day: 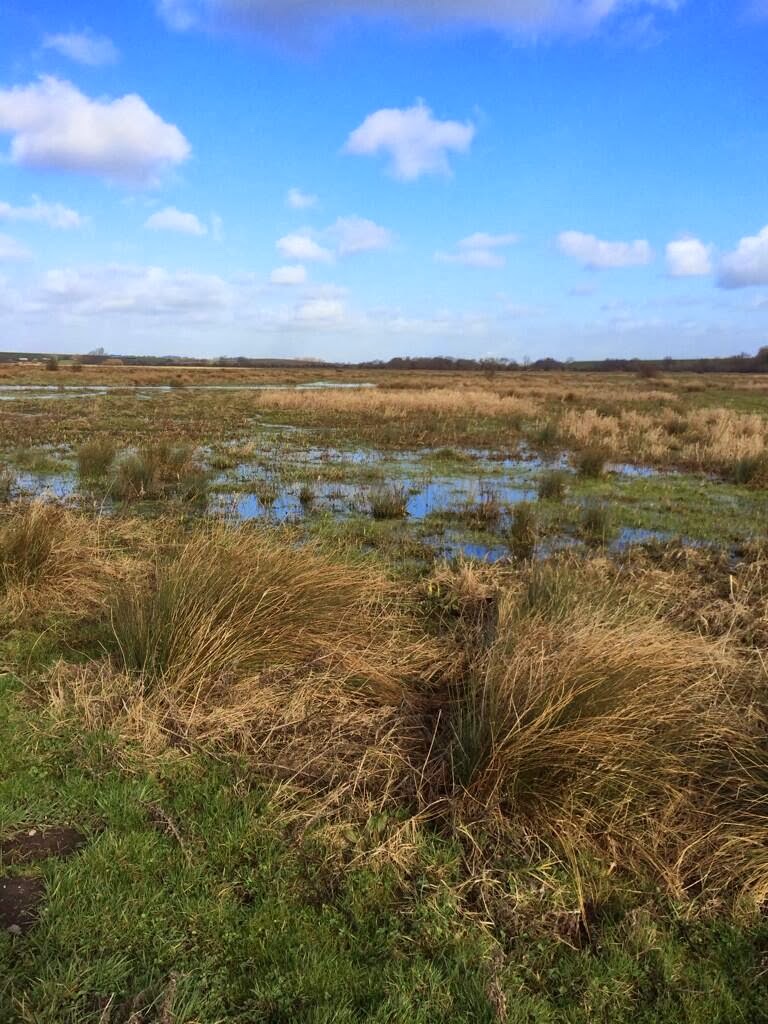 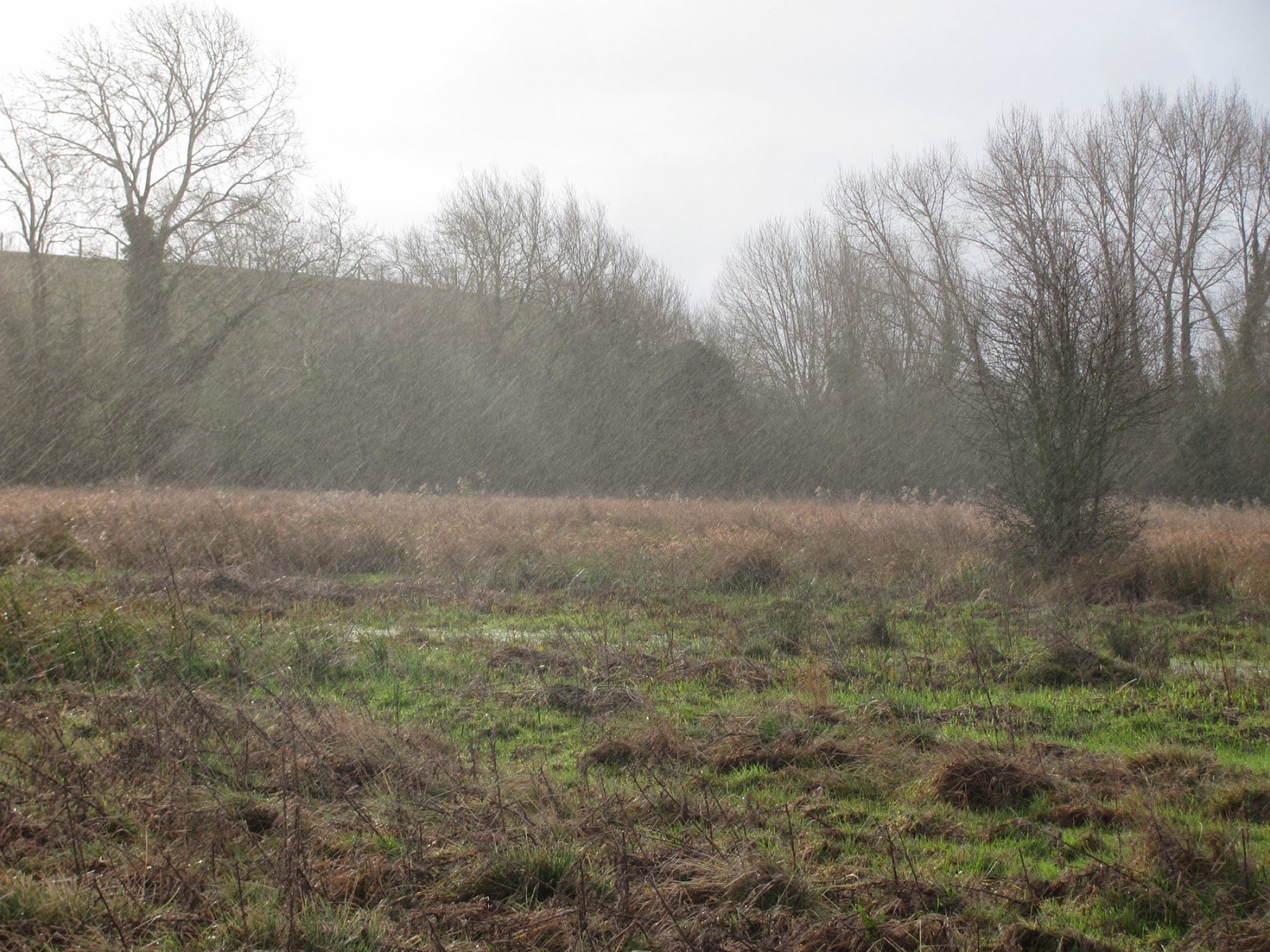 The recent floods have also been a hot topic (and for good reason) and talking of Staines Moor alone, it seemed to revive the site and opened all new hopes for being a new, albeit short-term, home to Waders. At least that was the hopes of myself and many other moor regulars. Truth is, the water on the moor is receding a hell of a lot quicker than probably expected, there should still be a large amount present for Spring but the levels have dropped quite significantly.
Here are two shots I took of the same area, with a little over 2 weeks (and more rainfall) in between them: 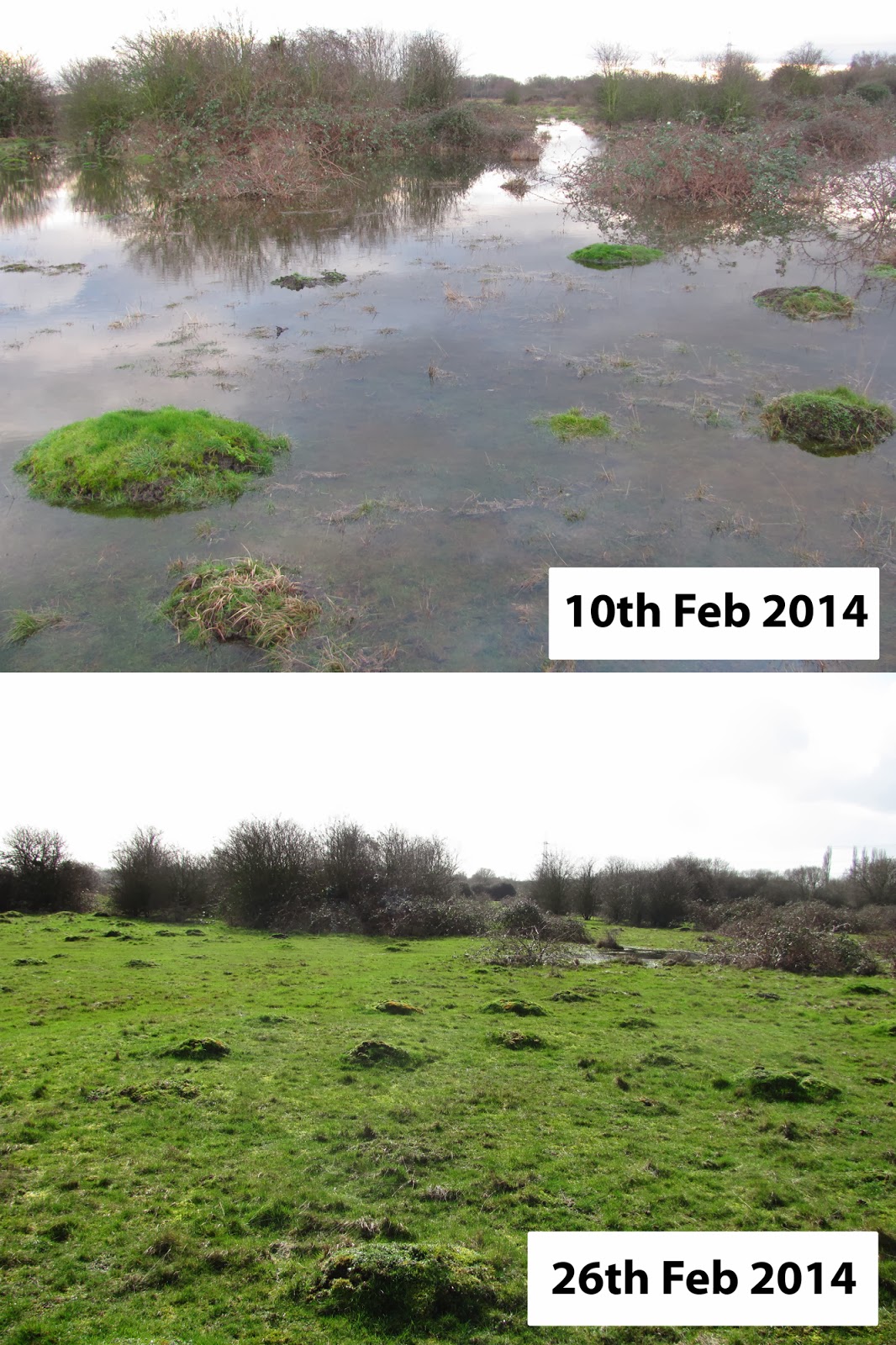 One of the believed reasons behind the inconsistency of the Short-eared Owls' appearances on the moor, is that the floods have dramatically reduced the number of small mammals, ie: its food source. Now, I'm always willing to be proven wrong but my opinion on situations like this, is that where there will inevitably be some casualties, most small mammal etc will actually move on with the flood, and therefore actually concentrating the Owls' food source into a smaller area, and not having a negative affect at all.
Whilst out on the 25th, I noticed a small hole in the grass. As I was thinking to myself that something had made it, I was chuffed to see a mouse dart out from almost at my feet, into that very hole, no more than 10ft away from the waterline of the floods. Maybe backing up my opinions.. maybe not?.. 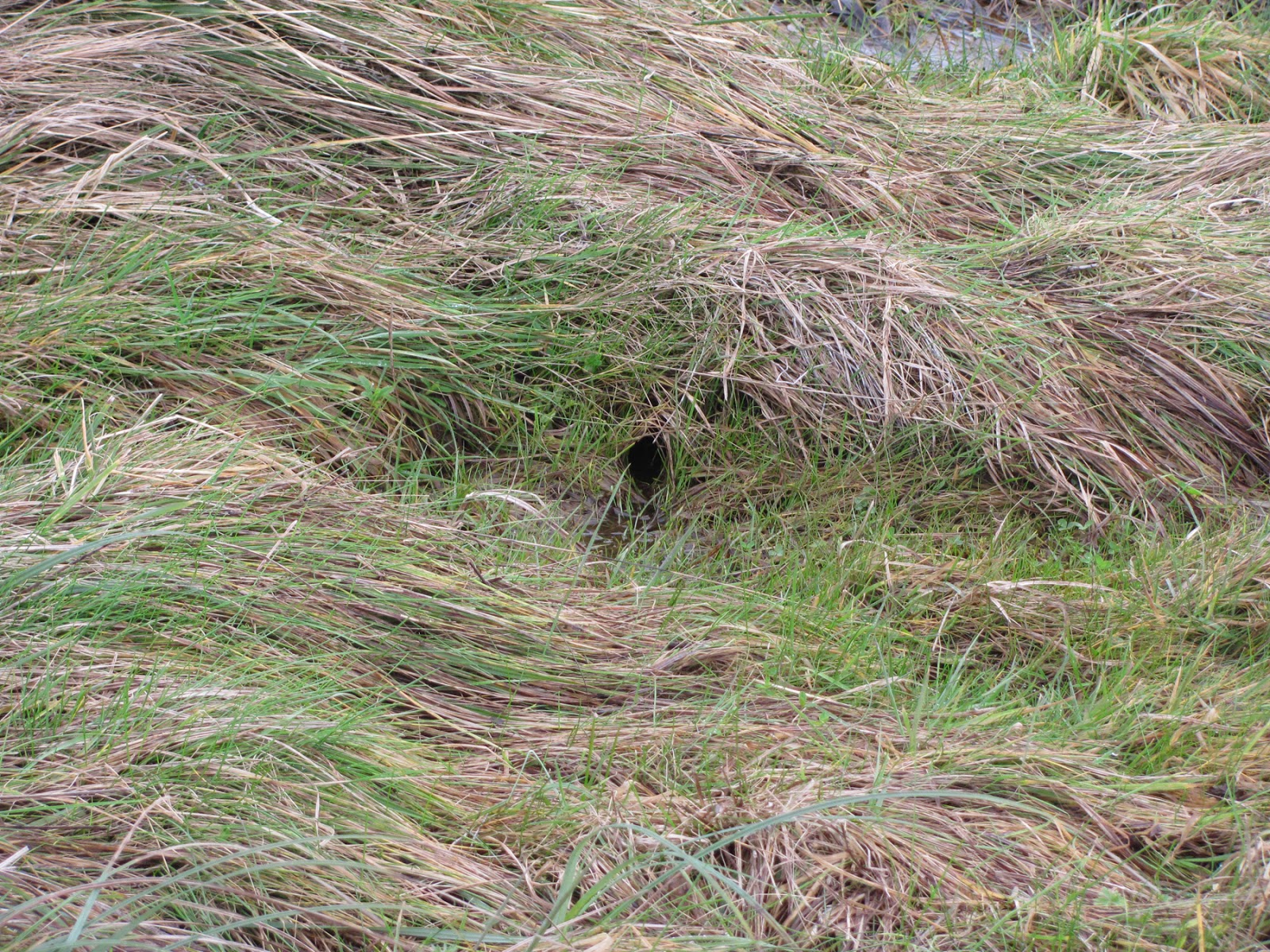 That's it for the February run-down, I can't wait to see what next month brings on the patch - hopefully it wont be long before I'll be adding Wheatear to March's records!