The MV light has had very little use so far this year, mainly due to my recent shoulder surgery which will keep me from driving for many weeks yet. For those who want to know, I had some more hardware added to my shoulder, by way of 5 more screws, 25 internal stitches and 2 more pieces of wire, to keep it from dislocating.

Anyway, yes - recovery is long winded and yes - I'm missing the birding and mothing that I would normally be doing, BUT where there's a will, there's a way!
Thanks to my carer/driver: Mrs Kerr, we've been out and about as much as possible during the day to get me my dose of nature. A few sunny days of late, has led to some rather enjoyable bug hunting and day moth-ing. Thursley common has provided some nice micro moth action lately, with some heathland specialities like this Acleris hyemana:


..and this Cydia succedana, the larvae of which feed inside the seeds of Gorse and Broom, so the adults are easily found on the same plants:


Also netted the marsh-loving Ancylis apicella, a relatively scarce species with a distinctive, hooked apex of the forewing:


A personal favourite of mine (for no reason other than - I just like it), is this Grapholita jungiella:


We've had some nice finds at Windsor Great Park as well, with all sorts being netted from the long grass, or beaten from tree branches. Weevils, Beetles, Plant Bugs, Hoverflies to name a few, but it's the micros that I've been looking for in particular and here are a few from yesterday:


Without doubt, the prize for the smallest moth of the day went to Glyphipterix simpliciella - the Cocksfoot Moth! These things are truly TINY, just a few mm's in length and hard to even follow flying around. The size does not take away from the detail and beauty though, I love 'em!
Apologies for the pic, as you can imagine, they are a tad tricky to photograph! 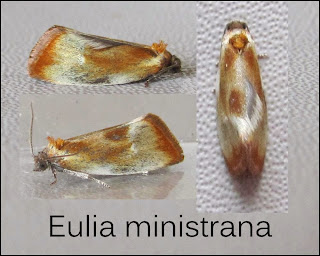 Not a micro this time but still quite small and dainty, a Small Yellow Underwing - Panemeria tenebrata. We found two of these, this one looking considerably fresher:


The next handful consist of a couple that I believe most likely need disection to confirm ID, and some that I'm still working on, so those, for the sake of argument I'll state as 'PROB'.
By all means, feel free to assist, correct or give your opinion on any of them.


Not something I catch or even see a lot of, this Coleophora species:

Again, I think some of the Coleophoras require gen det to be certain but on comparing pattern and colour alone, I can't help but think this looks a lot like C.otidipennella.


Hopefully having my face in a book for a while longer will have me confirming this next one, which at the moment is know to me simply as "PROB Epinotia immundana"...


The last in my 'pending' folder, a Mompha species*, has had me tossing up between a couple and comparing god knows how many different photos; I'm leaning heavily towards Mompha subbistrigella but not happy enough yet, to put my money on it. See what you think:

Normally, I'd leave the ones I'm still working on until I know for sure but thought it wouldn't hurt to throw them out there anyway.
All in all, (and with thanks to my supportive family!) I'm getting my nature fix and not doing bad for a one-armed bandit. At least I've got the time on my hands to hit the books for a change!

*Many thanks to Mr Bill Dykes for pointing out that my Mompha sp. is actually an Elachista sp.
Posted by Keith Kerr at 09:04