Red-tipped Clearwing on the patch.

Today was the first day that I've been able to drive since my shoulder operation so I opted to put my new found freedom to good use and head for the patch - Staines Moor.
Although I had the bins around my neck, today was about one main target; the invertebrates. I will put the rest of today's findings into another blog post in the coming days but one of the finds today, warranted it's very own 'airtime'

The weather was leading me a merry dance so I wasn't expecting much response to any pheromone lures today. The wind was bordering between 'a bit blowy' and full on blustery so again, I wasn't sure how things would play out. I always think you need some wind, to blow the pheromone across the land, but too much, and you risk "diluting" it too much before covering any sort of an area. Either way, I went for the Red-tipped and positioned it upwind of the Willows (the larval foodplant) along the Eastern edge, about 20 metres away, to cover as many of the trees as possible. I fashioned a make-shift pole/holder (roughly thigh-height) to tie the lure to, sat down and kept watch.


You have to allow time for the lure to spread (which isn't long in that wind!) and for the males, if there ARE any, to get wiff and home in on the source, so I spent the first 10mins or so wandering around, looking for other bits. If anything turned up at that point - I missed it!
After around 20mins and a few jumpy moments, where other insects visit to inspect the smell, low in the grass, I noticed something that just looked different. It's flight was reminiscent of how an Ichneumon wasp species moves, that kind of calculated, fully aware of everything, movement. It came straight up to the lure and then dropped down below heading for the grass, it was at that point I managed to net it and give out a small grin - ok, I admit it, I nearly screamed like a teenager at a Dustin Beaver concert!

Now, I know the photos with a natural background are best, but I was buggered if I was going to risk losing this beauty without getting something for my records first, pot or no pot! Needless to say, when I gently released it onto a nice tree trunk for its fashion shoot, it was off before I could even think about a shot!
So here are some photos of the 'catch of the day'... 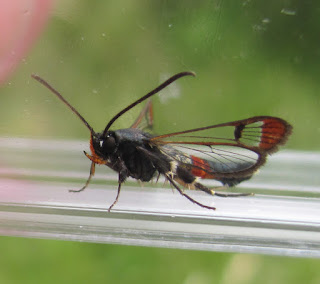 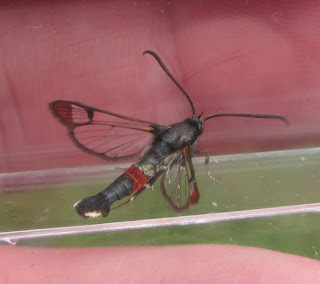 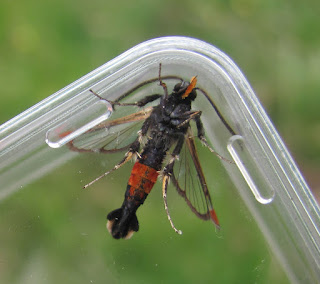 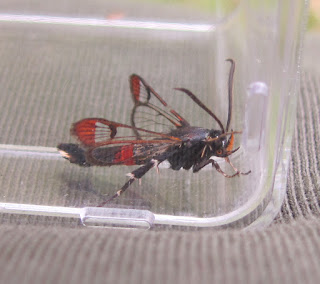 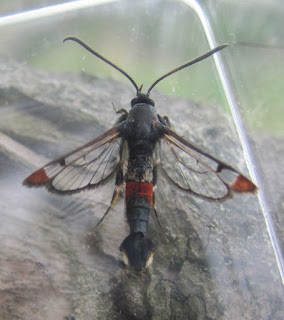 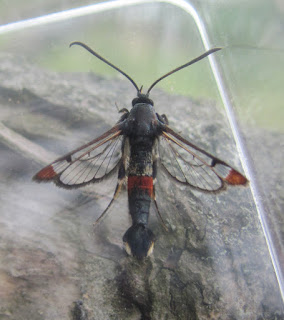 A great find for Staines Moor and a very nice find for me. Chuffed!

Also worth a mention, are the 2 Rush Veneer moths (Nomophila noctuella) I found, staying low in the grass to avoid the weather.

The other Lepidoptera finds of today were:


As I mentioned above, the rest of the day will have it's own new blog post to follow soon..