I made a couple of trips last week, to the patch (Staines Moor SSSI), joined on one occasion by fellow natural history enthusiast, Steve Minhinnick, with the main target of insects in mind.

As is usually the case when I am out 'doing my thing', I see everything flying around me and think to myself - if we could instantly identify everything we see on a typical walk, we must see literally thousands of different creatures everytime. Probably a few hundred different species of Diptera alone! An impossible gift that would take away all the fun anyway, so back to the real world..

The two days were very different in what the weather was doing and, as should be expected, provided very different results but probably NOT how you'd think.
On the first visit, the weather was overcast, blustery, mild at best and producing occasional short, sharp showers. Not ideal for seeing much on the wing, but very good for getting closer looks at anything that's trying to shelter from the elements.
I wont repeat the Lepidoptera findings of the day, including the find-of-the-day, a RED-TIPPED CLEARWING, as it's already in my previous blog, which you can find here.

What really grabbed my attention that day, was the almost biblical numbers of 7-Spot Ladybirds. It was such a pleasant surprise to see a native Ladybird doing so well, the 7-Spot to Harlequin ratio that day must've been 20-1, if not more. Fantastic!

Amongst the healthy 7-Spot population, I also found a 10-spot Ladybird and a handful of 14-Spots, at different life stages. Of the very few Harlequins I did see, only one was a larva.

I was particularly happy to find this next one, as it's something that I've wanted to find for a little while and have only ever seen in their adult form. Many of you have seen Lacewings before and they often visit moth traps everywhere but, as larvae, they are absolutely relentless and voracious predators! The aphids they prey on, have no chance.

Dotted around at the moment, are lots and lots of complex looking, funnel web-esq spider webs. The owners of these webs spend most of the time hiding inside the 'funnel', running out at lightning speed, only to catch whatever unsuspecting prey item has stumbled upon it. If you're lucky enough to see the spider, I think you'll agree that is an impressive beastie:


The last thing a lot of insects see, before the inevitable:


This next pic, is of something that when I first saw it, I just had no idea what it was, or what had happened? It took a reply from someone at a university in the U.S to clarify and so, now I know!
Here's an aphid that has been parasitized, most likely by a Braconid Wasp species: 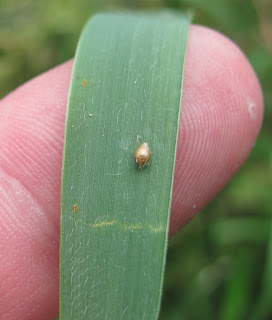 On the brighter of the two days, myself and Steve were treated to amazing views of Broad-bodied Chaser - Libellula depressa, both male & female. Seen in the morning sun, it was ideal as they were fairly calm and rather happy to sit and bask.

If you check the leaves of Willow trees at the moment, there's a good chance you'll find small colonies of the diminutive and rather smart looking, Willow Flea Beetle - Crepidodera aurata.
Although they can, and do, reach pest proportions, as a beetle I think they're great little things:


Along the boardwalk joining Stanwell moor to Staines moor itself, is usually a good spot to see (sometimes dozens of) Noon Flies - Mesembrina meridiana. They often bask on the wooden handrails and lay their eggs in cow pats, so Staines moor with its free roaming cattle, is ideal. The larvae of this fly are interesting, they are carnivorous and feed on the larvae of other Fly species, within the cow pat.


A few bugs were also noted, one of which was new to me and definitely played hard to get, staying deep within the tall nettles:

Diptera is a fascinating order and one I love. HOWEVER, the order is VAST and complex so I am only familiar with a fraction of what is out there to be found, so as well as the Noon Fly, I managed a closer look at some others.

The Dagger Flies. Not for the squeamish. They hunt other flies and use their long proboscis to stab their prey, to kill and then feed on.

This little fly is pretty neat, Poecilobothrus nobilitatus. The male (pictured below) puts on a display dance using the white tips to its wings, to impress a female. Only up close do you start to see the wonderful colours on some of these flies.

Very common and frequently seen is Episyrphus balteatus, probably best known as the Marmalade Hoverfly. Common but always a pleasure to see.

This was an interesting find and the first of its kind that I've ever seen. It's a Dark-winged fungus gnat - a member of the Sciaridae family. As the name suggests, they are pests of mushrooms and more than 600 species are known over Europe.


Quite how I noticed this next one, I do not know?! It is tiny! I didn't take a specimen so the closest I can get from photos alone, is that this is a Pachygaster species of Soldier Fly.

Another bizarre looking insect of our world and I'm sure, the idea behind a few horrow film writers, the Scorpion Fly:


A nice selection of Spiders on Staines Moor itself, including possibly the biggest Crab Spider I've ever seen! No tiny flies or aphids were going to do for this one - a Honeybee was dinner! Check it out:

...and a couple of other little beauties:


All in all, a decent couple of days bug-ing.