On Sunday we tried to go to Tice's but the road was closed and the diverted traffic took us miles away and my Dad got angry because we spent 2hrs driving around for nothing!

But today we took a different route and we finally got there. At Tice's Meadow we found lots of different things even 2 Grass Snakes and millions of Slow Worms - one of them was pregnant!


The first things that we saw were a few Butterflies like Red Admiral, Speckled Wood, Gatekeeper, Common Blue and Meadow Brown. We tried to catch the Harvestmen spiders but they were really good at escaping into the long grass. There were lots of Grasshoppers and Crickets, we saw Roesel's and Dark Bush Crickets.

We found a red beetle and I said it kind of looked like a red Shieldbug mixed with a ladybird but Dad said it was a Poplar Leaf Beetle.


When we moved on a bit further, Dad found a Sawfly that was bright orange, it was a Turnip Sawfly:


Dads friends say there are loads of beautiful Wasp Spiders at Tice's Meadow and we found loads. The most common place you see them are in little openings in long grass, down low to the ground. They are extremely fast at wrapping their prey up, it take only seconds!


When we got to the mound Dad introduced me to Rich who was birding through his scope and he showed me around where all the Wasp Spiders were around the mound. He showed me under some more metal sheets were we found another Grass Snake and I even held a Slow Worm! 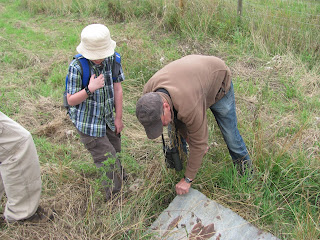 After a few minutes, Army Rich from the Army showed up and he gave me a Grasshopper that stayed on my watch for ages! 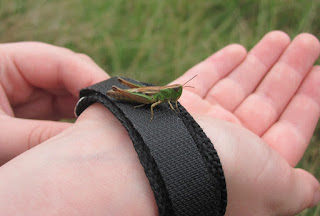 Then Rich let me use his scope to look at the pond where there were millions of Canada Geese. Rich also showed me Lapwing, Jackdaws and my first Green Sandpiper. In the field across the road there was a man who was using dummy Wood Pigeons to lure the real birds down so he could shoot them for bird pie.
After that it started raining and we had to pick Mum up from work so it was time to leave. It was my first trip to Tice's Meadow and I thought Rich and Army Rich knew more about birds than Dad does. I really enjoyed it and cant wait to go back again.

Hope you enjoyed this blog and I'll see you in the next one. Bye!!!!!