Life and death on Staines Moor

This post may seem a bit on the morbid side but we all love nature and it's just the way it goes.

I was almost deterred by the rain today but glad I made the effort. Stanwell Moor was alive with Blue & Great Tit flocks, to the back drop of the sound of a 20+ strong flock of Long-tailed Tits, and a lone Cetti's Warbler to boot. A few Goldcrests had 'befriended' 2 Chiffchaffs and all 5 were persistently chased off by the Long-tailed Tits.
I was just about passed the burnt out car when I spooked a female Marsh Harrier from deep in the thicket, by the waters edge to my right. It clattered through the dense growth away from me and didn't go far, but landed on the wrong side a tree for a better look. We both froze for a short while, it was obviously reluctant to leave the area but after maybe a minute, it took flight to the North over the paddock.
I must admit, I've not seen or known a Marsh Harrier to be in such dense undergrowth and practically paddling (yes - I know. The clue is in the name!) so was curious as to what it did not want to leave behind. Managed to tread through a mini nettle forest, over half a fence then under a tree, and found what it was doing down there; Breakfast!

Moorhen was on the menu: 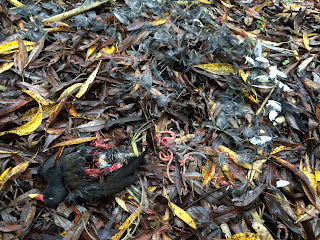 I hunkered down for a further 20mins hoping she would return but to no avail. I left the carcass in a position that I could remember, so I could check again on my way back. Low and behold, it had been moved and more flesh had been taken so maybe she did return? Who knows?


Onto Staines Moor and greeted by a male Kingfisher, bold as brass and very vocal!
Nothing out of the ordinary today; Goldcrests, Greenfinches, Green Woodpeckers and 2 Kestrels. Fieldfares and a few Redwings now settling in for the winter and a Coal Tit along the old railway - a great patch bird!
A(/the) Short-eared Owl got up from the grass and spent a good time hunting over the Eastern side. After a good recce in the NW corner and along the old railway, I curved round the check the NE corner but all was very quiet by this time
.
What I did find however, was a pellet from the Short-eared Owl: 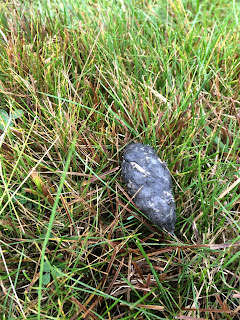 Not sure if this is a "normal" reaction or not, but I put it straight in my bag to have a good look at when I got home...much to Shell's dismay I think. It did stink quite a bit actually. Whoops! 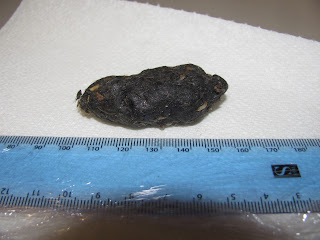 Once pulled apart and rinsed off, it was quite interesting to see what 'our' Shortie has been feeding on, on the moor. I didn't save each individual small bone. There were thin ribs, and tiny leg bones, none of which I could get a definitive ID from, on the kitchen side at home!
Then BINGO! two skulls, both with teeth in good enough condition to examine and one with the lower jaw still attached: 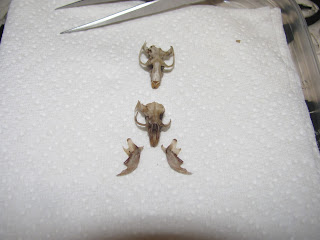 Straight to the books and comparing skulls left me two viable options; Bank Vole or Field Vole. A slight difference in size left the possibility of one of each, but inspecting the teeth under an eye piece
answered it for sure: Both Field Vole of slightly different ages.

Here's an image showing the teeth, the clearer criss-cross shape throughout, of the Field Vole, compared to the less-jagged, more rounded teeth of Water Voles. 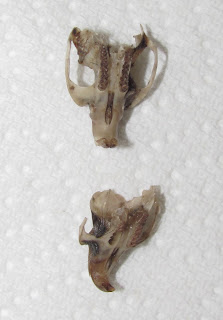 Zoomed in further if it helps: 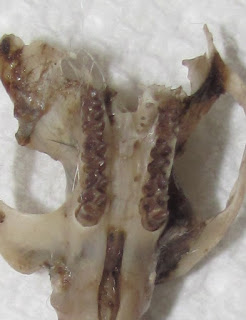 Very educational and satisfying to come to a solid conclusion. I just can't help myself really and can't stand NOT knowing what something is - as far as the natural world is concerned, that is.