Having found a nice Jumping Spider (Marpissa muscosa) in the past couple of weeks, it was quite a pleasant surprise to find yet another 'arachnid lifer' yesterday, while visiting relatives, just outside of Cambridge.

We spent the day yesterday, as I say, in a small village just outside of Cambridge, to deliver presents to good ol' Auntie Flo. The same Auntie Flo who has a pond and garden full of wildlife, without even trying! We took her out to Scotsdales garden centre for a look around, which is where we found our 'new' spider.


Quick tip:
carry an emergency pot with you EVERYWHERE. Especially Garden Centres - you never know what may have hitched a lift in the roots of foreign plants.

Usual story; Shell & Auntie Flo looking around plants & flowers whilst Archie and I search through the soil in the pots of exotic plants, or checking for leafminers. It was when we were inspecting the Cacti collection that...BINGO!...Spiders! An impressive Cactus about 2-3ft high was home to half a dozen separate spiders, all guarding their own webs, waiting for their next meal.
Now, remember that quick tip?? So did Archie, but I had let the side down a little! I wasn't completely guilty of committing the cardinal sin, I had a few pots. In my coat. In the boot of the car. Archie's gave the order: "Dad, RUN! Let's go! Mum: you stay with Flo, me and Dad will find you later!"

Anyway, armed with pots and trying to avoid both, Cactus spikes and weird looks from passing shoppers, I managed to pot one for a closer look.

The find was a cracking, tiny Uloborus plumipes a Feather-legged Orb Weaver, AKA the Garden Centre Spider. Yes - honestly!
From what I've read about the species since, plumipes is one of two Uloborus species known in the UK, the other being walckenaerius. It is not venomous and kills its prey, basically by crushing it with layers and layers of silk web. Native to the Mediterranean, south-east Asia and sub-Saharan Africa, it found it's way around the world by catching lifts in potted plants, eventually reaching the UK in the early 1990's. Originating from warmer climates, it has no chance of surviving a British winter unless of course, it spends it inside a nice greenhouse or exotic plant glasshouse.
plumipes builds a purposely untidy web with loose strands fraying in places and retains a slightly odd resting position of tucking in tight with only the front two legs extended forward. That, along with shape of its abdomen, general colour and web design, gives a perfect end result of a piece of old leaf litter or debris stuck in an old abandoned cobweb. After a little more research, it turns out that it has been recorded in almost every garden centre inside Camdridgeshire, as well as surrounding counties. So, if it's one you want to see - there's your best chance!
A matter of millimetres in length, this little beauty is actually a welcome addition to the glasshouse it occupies as it's a great controller of Whitefly and other tiny invertebrates such as mites and gnats.

No awards here for the few shots I managed, but good enough to admire this cracking little arachnid: 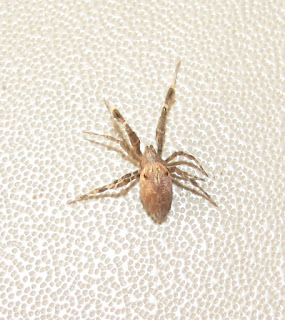 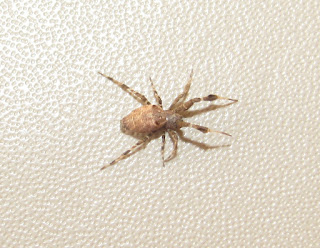 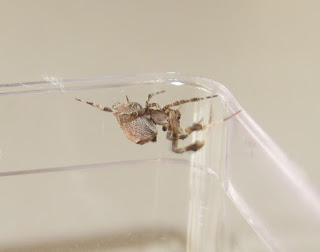 Far more detailed close ups of the species can be found on the eurospiders website HERE.