Firstly, what is a Tullgren funnel?! The Tullgren Funnel (or Berlese funnel/trap) method is what's used to extract insects from soil, leaf litter and moss etc. In a nutshell, it's a sample of any of those substrates with a lamp above it and a collecting pot underneath.
The lamp creates heat and light which the mini arthropods then go deeper down to avoid until they end up in the pot below, for you to look at.

I made a mini-Tullgren funnel a little while ago and was blown away by how many different things live within a handful of leaf litter etc. You really should give it a go. 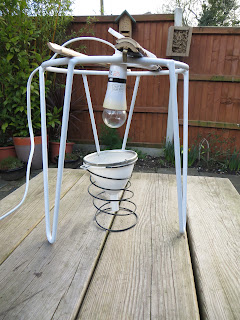 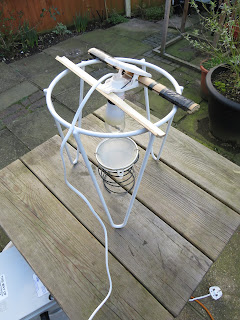 Glamorous, huh?! Ok, maybe not, but I've got a bit of a thing about making things out of stuff I've got laying around and this is made from:

- Plant pot holder/stand
- small funnel
- small sieve (handle hacksawed off)
- one of those ghastly fatball feeders that I didn't use because it's the kind that birds get stuck in (bottom cut out).
- Clip on light fitting
- 60w light bulb.
- 2 lengths of thin wood (I split a piece of Bamboo).

It really doesn't require a manual, you can see from the pics that the sieve goes into the funnel (held by wire) and the that sits on the fatball feeder. It's a bit springy but no biggie, it was more that it's the perfect height to get the samples close enough to the light while also leaving room to put a pot or tub under the funnel. 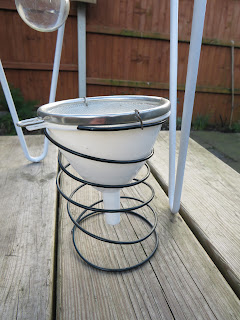 The light fitting is clipped to one piece of wood and the second piece is there keep the light level and not pointing down at an angle. You want the light focussed down onto your sample to maximise heat/light. 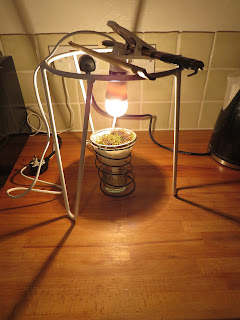 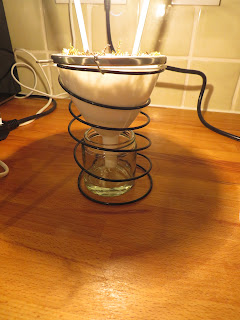 The collecting pot underneath would usually have alcohol or a liquid solvent in, to kill whatever is collected for investigating but I've always just used water - a small amount so that you can see how much is being collected and prevent anything walking or jumping out of your pot. The minibeasts you'll be finding in these samples are nowhere near bigh enough to break the waters surface tension and so tend to collect up with any loose dirt or debris that's fallen through, creating little islands on the surface.
I then have a good look under the microscope to see what's what, ID what I can and take some photographs before emptying the contents back into whatever soil/moss/leaf litter I got it from.
Job Done. No harm done.

It's not the most productive time of year, insect wise, to show an example of what can be found and in the handful of (pretty dry) moss I found nearby, there wasn't anything come out of it BUT don't be put off! In a month or so, this little 'raft' of debris can easily have 5,6,7,8 different species on it so well worth having a go! 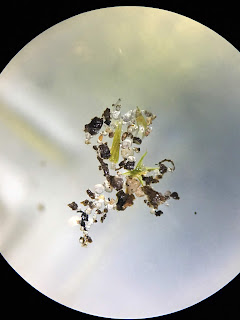