The small, shop-bought Bee Hotel we got for the garden served its purpose but rooms were booked quickly and in no time at all, it was a full house..or hotel. The usual unnecessary additions of sawdust and a couple of Pine Cones came to no use (as usual) but as the bamboo sections attracted an impressive number of Bees, we left it be.
This was a couple of years ago now and I will admit right now, that I was a bit naive about the upkeep and maintenance required to run a hotel, which I've recently learnt, can end up being detrimental to the very occupants you're trying to attract - the Bees!

So this dilapidated hotel fell apart during the winter and has definitely had its day. I kept the remains out the way to sift through and investigate to see what insects I could find - normal behaviour, right?!..of course it is ;)
As all the cells were sealed shut with mud last year, there were no new occupants so I deemed it safe to open up and have a look without destroying any developing Bees. What I found was plenty of larvae of what must be the Fly, Cacoxenus indagator, a cleptoparasite of Osmia bicornis - the Red Mason Bee: 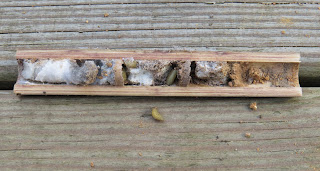 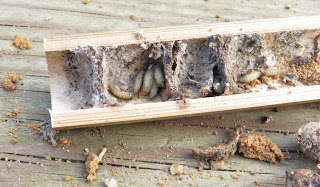 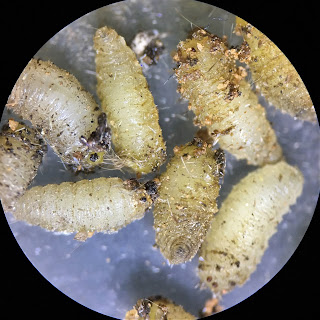 On the side of one of the Bamboo lengths, I also noticed a small hole which COULD be an emergence hole from a Monodontomerus species of Wasp? Not sure and haven't split that cane open yet so there may be clues inside. To the right of that hole, on the seem of the Bamboo joint, you can see a group of small white things which I'm fairly sure are Pollen Mites - probably a Chaetodactylus species and as the Red Mason Bees are in good numbers here, one could hedge ones bet at them being Chaetodactylus osmiae but I couldn't confirm that one I'm afraid! 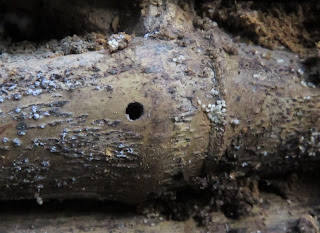 I found a few Bee cocoons trapped in between rotten debris, mouldy pollen stores and fly larvae, so they've all been placed in a tub in the off chance that something may emerge with the warmth of Spring. I've also kept the fly larvae in a pot with the contents of the tubes in which they were feeding on - cleptoparasite or not, that's nature and that's their life. Would be good to see an adult to confirm the species too, but I might just release these a way away from the new hotel!

All but one of the tubes had the chamber partitions and 'door' sealed with mud, but I did split one open to find the work of a Leafcutter, one of the Megachile species, I believe? Correct me if not, Bees are my kriptonite and I really MUST put more time into learning more about them!

What a learning curve that was this afternoon. Although the emphasis is on creating and looking after a healthy environment for the Bees, it's been another reminder as to just how many different things thrive in different conditions. Amongst the Dipteran squatters and Acarid intruders were also spiders, Bugs, Woodlice, Slugs and Fungi making a home out of what we deem fit for the bin.


With the Bees in mind however, what have a since learnt??

- before Winter hits, I'll move the new hotel to a covered area, to keep from the rain and therefore delay moisture and mould.

- The Baboo canes should be replaced annually, at a suitable time to not turn it into a parasite hotel.

- I need to spend more time ID'ing the Bees I see!


The new Hotel is up and open for business. It's been crudely knocked up and looks far from a 5* place but it will work: 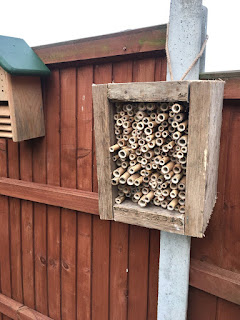 Let's see what visitors I get this year...